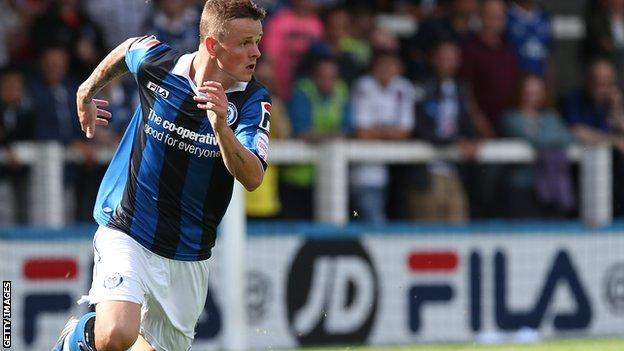 Bury manager David Flitcroft has continued the revamp of his squad by making three signings.

Midfielder Andrew Tutte, 23, has arrived on a free transfer after his release from Rochdale.

Former Northampton striker Clive Platt, 36, has agreed a deal to the end of the season and Tranmere forward Jean-Louis Akpa Akpro, 29, has joined on loan.

He's got a fantastic commitment to his game and has that pace, power and strength that supporters love to see

Tutte has signed a six-month deal after making 101 appearances for Dale and Flitcroft told the club website: "Andrew has the profile of a player I like to work with. He is a brave player with an excellent passing range."

Striker Akpa Akpro has a wealth of Football League experience, having played over 150 times for Grimsby Town and Rochdale as well as Rovers, and he will also stay at Gigg Lane until the end of the season.

"Jean-Louis is obviously a player I have worked with before. He is a player that loves football and loves to be involved in football," said Flitcroft.

"He's got a fantastic commitment to his game and has that pace, power and strength that supporters love to see."

"I'm excited about what I have seen after only one day at the club. The chairman's vision is something I very much want to be a part of," he said.

"Obviously I know the manager very well and his enthusiasm rubs off any player, no matter their age."