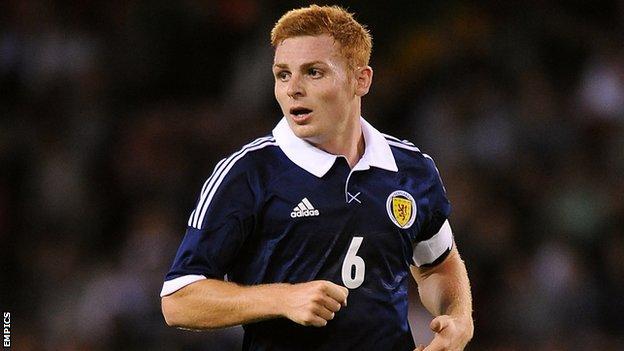 The 20-year-old Aberdonian, who has signed on an initial month's deal, is available for Saturday's trip to Swindon when Michael Jackson will be in caretaker charge for the first time.

Jackson is in charge for three matches following Graham Turner's decision to retire from management on Tuesday.

He scored twice in 58 appearances for the Dons before being signed by Roberto Martinez on a three-year contract for an undisclosed fee.

Fyvie has since made 10 appearances for Wigan, half of them in the FA Cup, having figured in the early stages of their run to Wembley last season.

He played in both matches in the third-round replay win over Bournemouth, again at Macclesfield in the next round and in the 4-1 fifth-round victory at Huddersfield - but did not feature in the squad again prior to being picked as an unused substitute in the 1-0 win over Manchester City in the final at Wembley in May.

This will be Fyvie's second loan spell away from Wigan this season, having made a couple of appearances for Championship club Yeovil Town.

Fyvie will make his debut for injury-hit Shrewsbury at Swindon on the back of Town's run of three straight defeats.

It will also be a boost for the struggling League One side after a difficult week.

On top of Turner's departure, they have now missed out on trying to bring back on-loan winger Adam Reach from Middlesbrough, following his decision to join another League One side Bradford City.

And they slipped into the bottom four on Tuesday night, although with identical points, goals scored and goal difference as 20th-placed Sheffield United, as a result of Crewe's victory over MK Dons.