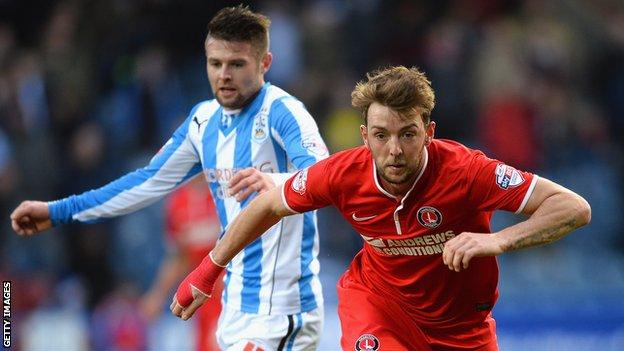 Simon Church struck early in the second half to send Charlton into the fifth round of the FA Cup at the expense of Championship rivals Huddersfield.

The former Reading striker, who had a spell on loan at Huddersfield last season, poked home after being put clear by Lawrie Wilson.

The home side had chances with Danny Ward shooting wide, while Sean Scannell shot at keeper Ben Alnwick.

But Charlton defended well to secure their passage to the next round.

This fixture marked the third time this season Huddersfield have hosted Charlton at the John Smith's Stadium, having beaten them 3-2 in the Capital One Cup and 2-1 in the Championship.

Simon Church played seven games for Huddersfield during a loan spell from former club Reading in 2012, scoring one goal

A third victory over the Addicks looked a distinct possibility in a first half the Terriers dominated, with Charlton lacking the quality needed in the final third to threaten the home side's defence.

But for all their possession, Huddersfield could not find a way past goalkeeper Alnwick and went into the break level.

Charlton emerged from the tunnel for the second half a much-improved side and within nine minutes of the restart they were ahead.

Wilson fed a pass to put Church through and the striker kept his composure to calmly nudge the ball past Huddersfield keeper Alex Smithies.

That prompted a barrage of Huddersfield attacks, with substitutes Scannell and Duane Holmes creating the main outlets for the home side's best moves.

Scannell clipped a pass to Norwood, who in turn found Ward but his shot was gathered by Alnwick at the near post.

Adam Clayton then sent Holmes through on goal with one minute remaining but the 19-year-old midfielder shot wide.

"It was a poor goal to concede and we have to hold our hands up.

"We are out of the competition because it was an error strewn game and we did not take our chances.

"The disappointment to me was that we stopped probing and passing and didn't have enough guile."

"We rode our luck at times and our keeper made a point blank save to keep us in it.

"We just kept chipping away and got our just rewards."