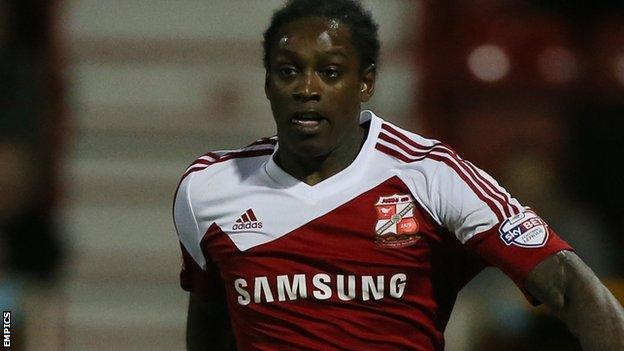 Swindon goalkeeper Wes Foderingham says striker Nile Ranger has been unanimously welcomed back to the team.

Ranger, 22, apologised to teammates for a series of disciplinary issues last week and marked his return with a goal in Saturday's win against Peterborough.

It followed a meeting between Ranger's representatives and club officials to decide his future at the County Ground.

August 27 - Scores first goal for Swindon in their 2-0 League Cup win over QPR.

October 28 - Denies rape at a hearing at Newcastle Crown Court.

November 14 - Fails to report for training after being given a period of leave by the club.

November 15 - Swindon confirm Ranger was given time off to prepare for forthcoming rape trial.

December 4 - Fails to turn up to a team meeting ahead of Town's FA Cup defeat by Macclesfield.

December 13 - Manager Mark Cooper tells Ranger he will not feature until he shows "respect" to the team.

December 27 - Mark Cooper says they may look to offload Ranger in January after he fails to train following the Box Day loss.

January 2014 - Due to meet with club about his future.

January 11 - Recalled to the team and scored in 2-1 win over Peterborough.

"None of the boys have a problem with him - we all like him," Foderingham told BBC Wiltshire.

"It was not so much us asking him back, it was him wanting to come into the team and us allowing him.

"He has apologised to us and said he wants to get his head down. Whether or not he does that remains to be seen.

"We just want him to get his head down and do his best to help us."

Ranger joined Swindon on an initial 12-month deal in the summer despite facing a rape charge.

Before his surprise recall to face Posh, the former Newcastle striker had previously played in Swindon's 3-2 loss at Brentford on Boxing Day.

He failed to report for training the following day and manager Mark Cooper said he would look to offload him in January.

Ranger's headed goal against Peterborough was his seventh of the season, but Cooper remained coy on whether he has a future at the club.

"Nile came to me and wanted to apologise to the players," Cooper said.

"I think, in football terms, they want him in the team. The rest of the stuff off the pitch, they feel very let down by him and they let him know that, but at the end of the day they decided that we are a better team with him in it.

"Words are cheap and I've heard it before from Nile, so let's see."

Ranger's trial is due to take place on 24 February after he was charged with rape following an alleged incident in Newcastle 12 months ago. He denies the charge.