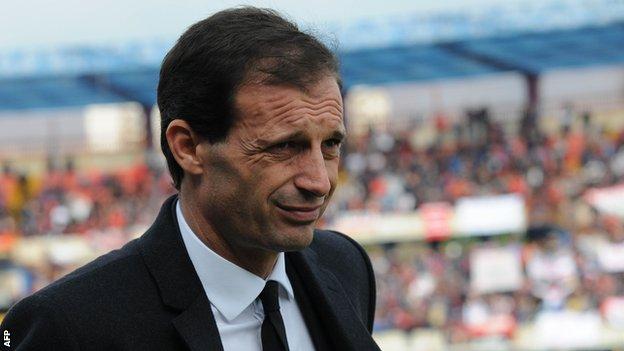 AC Milan have sacked coach Massimiliano Allegri, a day after a 4-3 league defeat by minnows Sassuolo.

The 18-time Italian champions are 11th in Serie A, 30 points behind leaders Juventus.

Allegri, 46, who was due to leave the San Siro when his contract expired at the end of the season, departs along with his backroom team.

Assistant coach Mauro Tassotti, a former Milan player, has been put in temporary charge of the side.

A club statement read: "Massimiliano Allegri and his staff have been relieved of their duties.

"AC Milan would like to thank Mr Allegri and his staff for their time with the club and wishes them the best for the future."

Former Cagliari boss Allegri led Milan to the Serie A title in his first season in charge after replacing Leonardo in June 2010.

They finished as runners-up to Juventus the following year but ended last season 15 points behind Juventus, who won the title again.

Following Sunday's defeat to Serie A newcomers Sassuolo, club director Barbara Berlusconi - the daughter of owner Silvio Berlusconi - said it was "a disappointing evening, like others, which confirms that a change is both necessary and urgent with the contribution of everyone concerned.

"It's no longer tolerable that our fans participate in performances like these."

Tassotti, 53, spent 17 years as a player at the San Siro and has been on the coaching staff since he retired from playing in 1997.

A second Serie A club dispensed with their manager's services on Monday as Livorno sacked Davide Nicola with the side in 19th place.