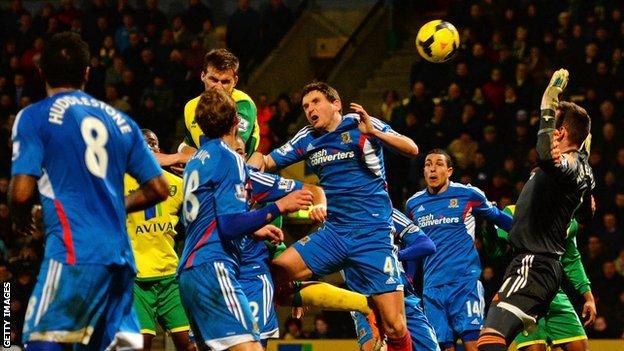 Bennett headed in from a corner to secure a first home Premier League success since November and relieve the tension after a frustrating afternoon.

Tigers debutant Nikica Jelavic hit the post inside two minutes, but the hosts had the better chances after that.

Hull's miserable day got worse when Tom Huddlestone was sent off late on.

The midfielder was dismissed for a second yellow card, seemingly ending Hull's hopes of an equaliser, but they might still have salvaged something in injury time only for Curtis Davies to head wide when well placed.

Hull's shocking away record - just five points on the road this season - hardly gave cause for much pre-match optimism, even against a Norwich side who had not won at home since beating Crystal Palace on 30 November.

But the Tigers started in the same impressive manner they had maintained for long spells before eventually succumbing to an Eden Hazard-inspired Chelsea last Saturday.

Jelavic looked busy and dangerous throughout but spurned a wonderful chance to make an impact inside two minutes of his debut, hitting the outside of the post with a left-footed strike after a fine move involving Liam Rosenior and Robert Koren.

Along with Stoke, Hull still have the joint worst away record in the Premier League, picking up only five points on their travels this season

Rosenior then had a difficult opportunity at the far post, which he volleyed wide.

But the hosts began to settle and Hull's early rhythm seemed further affected by a defensive reshuffle that saw the injured James Chester replaced by Maynor Figueroa.

Summer signing Ricky van Wolfswinkel was unlucky not to grab his second Canaries goal with a smart turn and half-volley, but he could not swivel in time to get his close-range effort on target following a Snodgrass header.

And Scotland international Snodgrass sent over a series of teasing crosses, two of which could easily have resulted in headed goals for van Wolfswinkel.

Hull, whose other recent signing Shane Long, was denied a debut because of an ankle injury, ended the first half strongly but Norwich were the more threatening side after the interval.

Nevertheless, a series of blocked shots was as close as the hosts had come to a goal, despite mounting pressure, until Bennett rose to head in his first goal for the club when Tigers keeper Allan McGregor flapped at a late corner.

Davies could still have earned an unlikely point after Huddlestone was sent off, but the Canaries held on to pick up the three points that move them up to 12th, level on points with Hull.

"It might not have been thrill-a-second stuff but what a result for Norwich. They could have gone bottom had other results not gone for them this weekend but now they are up to mid-table. The fans were beginning to get disgruntled here but this relieves so much pressure."

"I saw it as a big win. It is so tight down there it is very difficult to talk about must-win games, but I know it is an important win - for the fact the opposition are close to us in the division and it is a close game.

"You have to not panic and be composed. Things can change over one game or a two-game period.

"It is never nice when there is a lot of criticism around, but it is part and parcel of the game and for any criticism that I might have had or feelings about my job, maybe next week it will be someone else.

"On the balance of the game I don't think there is anybody that could not agree that we deserved to win the game. I thought we were the better team over 90 minutes, but they are a good side and defend very well.

"We perhaps didn't create enough clear-cut chances, but we put them under a lot of pressure. At that stage of the game there is a part of you that thinks, 'It isn't going to be our day', but the lads were resilient."

"We had a big chance in the first couple of minutes when Jelavic hit the post and Liam Rosenior had a really big chance, but overall in the second half we were a touch disappointed with how we handled the ball.

"He [Jelavic] has done everything right. His connection with it was right, he struck it really well and I was expecting it to nestle in the back of the net. It has hit the post and missed by two inches. What a start that would have been for the lad.

"When you play like that away form home, to come away with a point would have been terrific for us, another point on the board, but it wasn't to be.

"It is about expectation. We are a newly promoted club. Everybody expects us to be in the bottom three and when you have been here for two or three years everybody expects you to be in the top six. That is how it is in the Premier League, but Chris has been around it a long time."