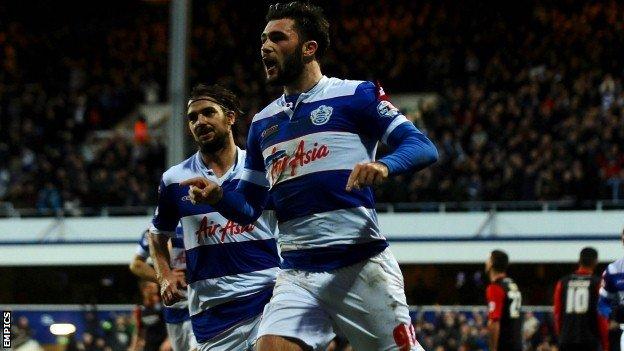 Charlie Austin scored twice as QPR moved up to second in the Championship with victory over Huddersfield.

Rangers struggled until 10 minutes after the break, when Austin smashed in from Andy Johnson's flick-on.

Recent signing Nahki Wells equalised for the Terriers with a header from Adam Hammill's cross.

But with 11 minutes remaining, striker Austin grabbed the winner for QPR when he nodded in Benoit Assou-Ekotto's right-wing corner.

The visitors impressed in defeat, however, with Danny Ward twice coming close to scoring in the first half when he fired over from close range and then squandered a golden opportunity by dragging a shot wide.

QPR are unbeaten in the last four meetings between these sides, winning three

QPR had another lucky escape when the unmarked Jonathan Hogg shot tamely at Green despite having plenty of time and space after collecting Ward's pass.

But Harry Redknapp's QPR side, who kicked off eight points behind early winners Leicester, were at least able to rely on Niko Kranjcar's set-piece deliveries, and another corner from the Croatian led to Austin and then Henry heading against the bar.

They finally found the net in the second period when Austin scored his 14th of the season with a composed finish.

However, Town hit back midway through the half, Bermuda international Wells nodding in from Hammill's delivery.

Rangers responded strongly with substitute Matt Phillips forcing a fine save from keeper Alex Smithies before Austin headed what proved to be the winner, moving them above Burnley and leaving Huddersfield 13th.

"We were better in the second half. We needed to up our game and we got two goals from Charlie, which has been pretty much par for the course.

"He's the one who has scored the goals for us and that's why we are where we are, as well as the fact that we've managed to keep the ball out of the net.

"I also thought Matt Phillips and Armand Traore made a difference when they came on as perhaps we lacked width."

"On the one hand we played really well but on the other we've not got that point, so it's difficult to swallow.

"In the first half I thought we were brilliant. That's no surprise to me, because we're good. We came here and took the game to them.

"We've done well, but we had clear-cut chances and should really have been 3-0 up at half-time. We didn't take those chances and you know they are then going to come at you in the second half."