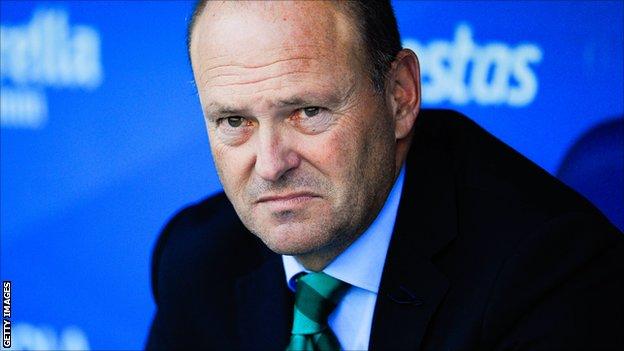 The Premier League club have been looking for a new manager since sacking Steve Clarke on 14 December.

Spaniard Mel, 50, held talks with West Brom in December but was initially ruled out after it became clear he wanted to bring his own backroom staff.

Who is Pepe Mel?

"Mel has held a long-cherished wish to work in the Premier League, and he has been taking English lessons for several months in preparation for his much-desired move to Europe's most powerful domestic competition."

Downing, caretaker manager for the past five matches, will remain in charge for Saturday's game at Southampton, with Mel watching from the stands.

Mel, sacked by Betis in December after three years in charge, will take charge of the team for the first time for the home game against Everton on 20 January.

West Brom, who then face Aston Villa, Liverpool and Crystal Palace, are 14th in the table, four points above the relegation zone.

"His appointment concludes an extensive recruitment process during which we have cast the net far and wide to identify the most suitable candidate to take the club forward.

"Pepe was a strong contender from the outset due to his impressive achievements and has emerged as our number one candidate.

"He is a forward-thinking coach whose teams are renowned for playing an attractive and positive style of football."

"West Brom can put as much gloss on this appointment as they wish - 'our number one candidate' said the statement - but they went back to Pepe Mel because they were running out of options. He was also available, with no compensation necessary, a matter close to the heart of chairman Jeremy Peace.

"If they were so keen on Mel, who we're told impressed them early in the process, why didn't they find the necessary wriggle room to land him a fortnight ago, rather than allowing the talks to founder over Mel's wish to bring in more than just one member of his support staff? Was there another reason why West Brom went cold?

"And if Mel was the outstanding candidate, why was the club still interviewing others until late Wednesday, hoping Keith Downing would hold the reins until the summer when a more suitable candidate could be found?

"I wonder if Mel will bring in more of his own backroom staff over the coming months. That'll give a clue as to who held the upper hand in his subsequent negotiations with West Brom. Did they go back to Mel because they'd been knocked back by several other candidates? And did Mel know that, thereby strengthening his negotiating hand?"

Former Betis striker Mel was appointed manager of the club in 2010 and guided them back into La Liga as Segunda Division champions 12 months later.

They finished seventh in La Liga last season but Mel was sacked after a run of eight domestic games without a win, with just two victories in all competitions before the start of December.

"Mel may prove an inspiring appointment by West Brom, but this wasn't a straightforward process," said BBC reporter Pat Murphy.

"His expansive style of football will suit the club's philosophy. It seems he was unlucky to have so many players sold from under his feet at Real Betis, leading to his recent sacking.

"His tenuous grasp of English (he's learning it) shouldn't be a major issue if he demonstrates coaching acumen like Mauricio Pochettino has since arriving at Southampton a year ago. Pochettino still can't trust his English in public, but he's a very fine coach."

"He had a bit of an unfortunate run this season where he had a few injuries, a lot of key players left and he had no money to replace them," Brassell told BBC Radio 5 live.

"He's someone who's committed to exciting, attacking football. He always has a good relationship with the fans. He's an honest, decent guy and I think West Brom fans will be pleasantly surprised.

"His English is pretty serviceable. On the training field he'll be absolutely fine getting his ideas across and that's the most important thing."

Mel has also had spells at eight other clubs, including Tenerife, Alaves and Rayo Vallecano, in his 14-year coaching career.