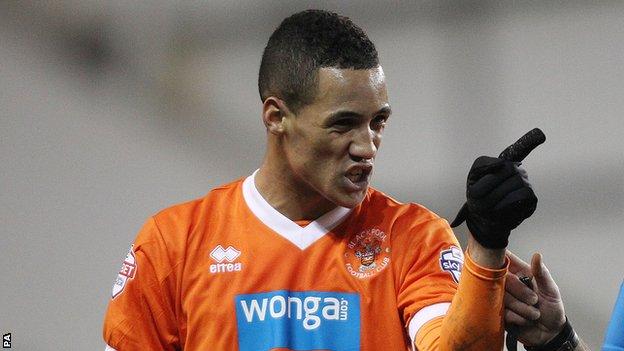 Swansea are in talks to sign Blackpool winger Tom Ince during the January transfer window, BBC Wales has learned.

Ince has also been linked with a move to French Ligue 1 side Monaco in December to stay with the Championship team.

But Blackpool chairman Karl Oyston has denied there have been any talks between the two clubs.

"[There have been] no talks with anyone and no offers have been received," he told BBC Radio Lancashire.

"In the football industry, the truth and facts have very little bearing on what is actually going on."

The son of ex-England midfielder and Blackpool boss Paul Ince was set to join Swansea's south Wales rivals Cardiff City in the summer.

But the 21-year-old after becoming a father, stating he did not "want to leave his family or the Seasiders at this stage of his life".

Swansea are pursuing Ince as they await news on who suffered a hamstring problem in their 3-2 loss to Manchester City on New Year's Day.

Ince, who has played 12 times for England Under-21s, began his career at Liverpool, making one substitute appearance in the League Cup, before joining Blackpool in August 2011.

He has scored 33 goals in 111 matches for the Tangerines, including seven goals in 23 games this season.

However, Blackpool, who are 12th in the Championship, are on a poor run of form and have failed to win in their last eight matches in all competitions.