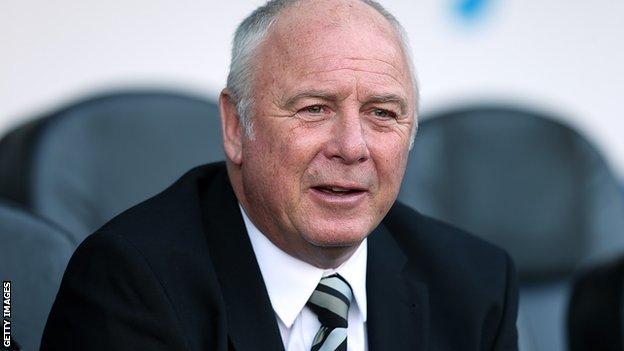 Northampton Town caretaker boss Andy King believes the next two games could decide his future in the role.

The Cobblers host York City and then go to fellow strugglers Torquay, having been in the League Two relegation zone since September.

King told BBC Radio Northampton: "We have got two massive games. They will let us know where we are and perhaps the chairman is waiting for that.

"The only pressure I feel is that I don't want to let anyone down."

The 57-year-old has been in charge since Aidy Boothroyd's sacking last month and in a show of faith, chairman David Cardoza has told the former Swindon and Mansfield boss he can make short-term and long-term signings.

Everyone's buzzing a little bit too much. We haven't turned the corner yet.

"That is massively important to me," said King. "It makes a statement.

"I'm satisfied to be at the club and to work with the chairman, and he's letting me bring players in, but I want it finalised.

"It's the chairman's decision, he's got this club at heart and he's got to make a big decision.

"I'm accepting it. I'm thriving on being manager. It's not perfect but I understand the reasons why."

King expects to bring in a left-back on loan to cover the shoulder injury sustained by Joe Widdowson, but does not anticipate making a host of signings in the light of last Saturday's 2-1 win at Newport.

However, he has warned his squad not to get carried away by a single result.

"I'm looking to bring a loanee in, otherwise I'm quite comfortable with what I've got," he added.

"It's the same players, they've responded, but everyone's buzzing a little bit too much. We haven't turned the corner yet.

"Burton was a little bit unlucky, Portsmouth was a good, fighting performance and Newport was a fantastic win.

"But I need to keep it going. I'm quite happy to let the players go out and do the talking."