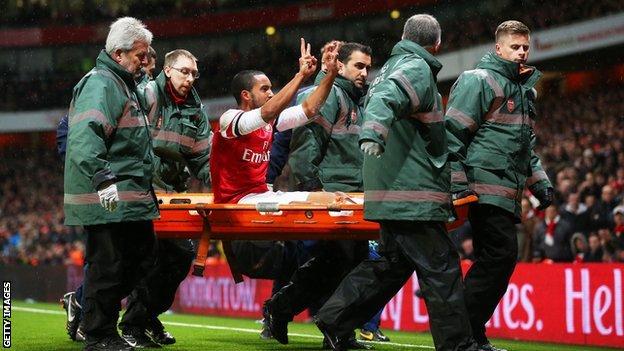 The Football Association will take no further action against Arsenal's Theo Walcott over his gesture to Tottenham fans during Saturday's FA Cup tie.

England forward Walcott, 24, signalled the Gunners' 2-0 lead to Spurs' fans as he was being taken off on a stretcher with a knee injury that will rule him out of the World Cup this summer.

Arsenal boss Arsene Wenger said he was reacting to having coins thrown at him.

The FA said the player had been "reminded of his responsibilities".

Both clubs have also been contacted by the FA about objects thrown onto the pitch from fans in both a home and an away section at Emirates Stadium, at different times during the game.

"The FA condemns any such acts and will liaise with both clubs and the Metropolitan Police to identify those responsible and support the strongest sanctions available, including life bans," said the governing body in a statement.

Wenger insisted Walcott, who was pelted with objects from supporters in the Spurs end after he made the gesture, did not deserve to be punished.

Walcott was carried off the pitch in the 83rd minute, and Arsenal announced on Monday he would be out for at least six months after rupturing the anterior cruciate ligament of his left knee.

The former Southampton player missed two months of the season with a stomach injury and has scored five Premier League goals since returning in November.

Wenger is already expected to be without Denmark striker Nicklas Bendtner for all of January with an ankle injury, while France forward Olivier Giroud has missed Arsenal's past two games through a combination of illness and an ankle knock.