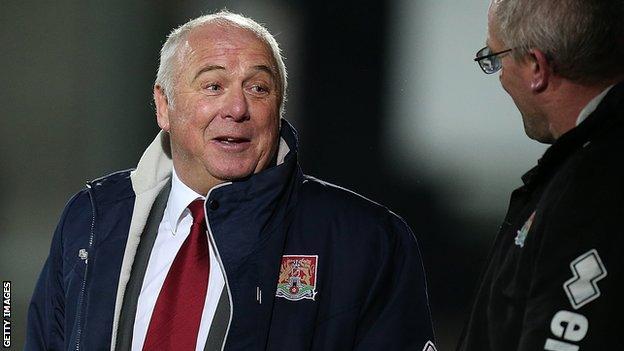 Northampton Town chairman David Cardoza has said caretaker boss Andy King will be given the chance to prove he can take the job permanently.

The Cobblers have interviewed a number of candidates, including King, who has one win and one draw from his three games in charge.

"Andy's the one putting the team out and if he gets results he is in a much better position than anyone else," Cardoza told BBC Radio Northampton.

"At the minute he's proving that."

He added: "We are looking to strengthen the team and I expect by Saturday we should have two or three players in."

Former Mansfield and Swindon boss King, 57, has been in temporary charge since Aidy Boothroyd's dismissal on 21 January, with the Cobblers bottom of League Two.

King, who was Boothroyd's assistant, lost his first game 1-0 to Burton, but has since drawn against Portsmouth and beaten Newport - all three games being away from home.

"We don't see the point of changing anything while things are going the right way," explained Cardoza. "But we understand Andy and the fans need to see that things are stabilising and they are.

January is clearly an important month for the club and decisions on players in and out of the club do need to be made, and will likely determine whether or not the Cobblers are relegated.

But it still would have been hard on King not to let him continue in the role, having taken four points from three away games during an injury crisis.

Players who have underperformed are kicking on under King, but additions are still needed. And it doesn't sound like David Cardoza will leave avoiding relegation to chance, keeping the budget high.

"At the minute I'm happy with Andy and happy with everything I'm hearing from the club, players and media.

"Things look like they're improving and I want to see Andy given a good go."

Cardoza also says that the playing budget, already indicated to be in the top seven in League Two, will not be reduced.

"You're going to see some movement out this week, I'd have thought," he added. "The wage bill is not coming down, though.

"Andy is very happy with the response he's had from some of the players who've been underperforming. If we can get the most out of them and add some quality as well, I think things will look a lot different at the end of January.

"I trust Andy's recruitment. He'll have the ability to bring in short-term and long-term signings.

"If someone else was to come in, I'm sure that person would be happy [with the signings] anyway."