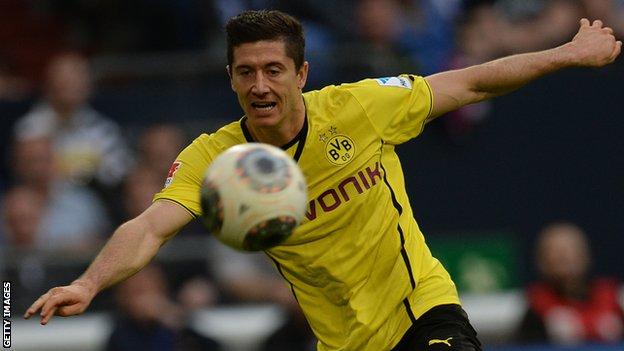 The 25-year-old Poland international has agreed terms on a five-year deal and will arrive at Bayern on a free transfer when his contract expires.

Lewandowski has scored 16 goals for club and country this season.

Lewandowski could have signed for Blackburn in the summer of 2010 for £4.3m from Polish side Lech Poznan.

He was due to hold talks with then Rovers boss Sam Allarydce but the Icelandic volcanic ash cloud forced the cancellation of his flight.

He grabbed the winner when Dortmund beat Arsenal 2-1 in the Champions League in October.

Bayern chairman Karl-Heinz Rummenigge was delighted with the deal, saying on the club's official website: "We are very pleased that this transfer is successful.

"Robert Lewandowski is one of the world's best strikers, he will strengthen the squad of FC Bayern and give us a boost."

Lewandowski is the second key Dortmund player within a year to announce a move to Bayern, after playmaker Mario Gotze agreed to a 37m Euros (£31.5m) transfer to the Allianz Arena last April.

The switch had been widely mooted for months, with the frontman denying in September he had confirmed he would definitely join Bayern.

He played a starring role in their run to an eventful Champions League final defeat to Bayern last season, memorably scoring four goals in the semi-final first leg against Real Madrid.

Jurgen Klopp's side have struggled this term, however, and sit 12 points behind leaders Bayern in fourth.

Despite securing progression to the knockout stages of the Champions League, they won only one of their last six top-flight games before the winter break.