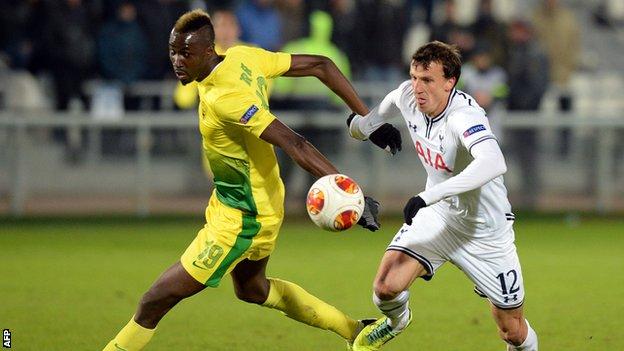 The 23-year-old has agreed a four-and-a-half-year contract to join a strikeforce that already contains £50m Colombian superstar Radamel Falcao.

Radamel Falcao: Striker was signed from Atletico Madrid for a reported £50m

Reports have linked him with an instant loan move to West Ham from Monaco.

Traore played alongside current Chelsea forward Samuel Eto'o at Anzhi after joining from Kuban Krasnodar in June 2012, but is the latest player to exit the Dagestanis following billionaire backer Suleiman Kerimov's decision to curb his spending.

The transfer sees him swap the team bottom of the Russian top flight for one contesting the French title, with newly promoted Monaco second, three points behind Paris St-Germain.

Traore has scored four goals in seven international games and was part of the Ivory Coast squad beaten in the quarter-finals of the 2013 Africa Cup of Nations by eventual winners Nigeria.

He was a second-half substitute in Tottenham's 2-0 Europa League group-stage win at Anzhi in October, but did not feature in the return match.