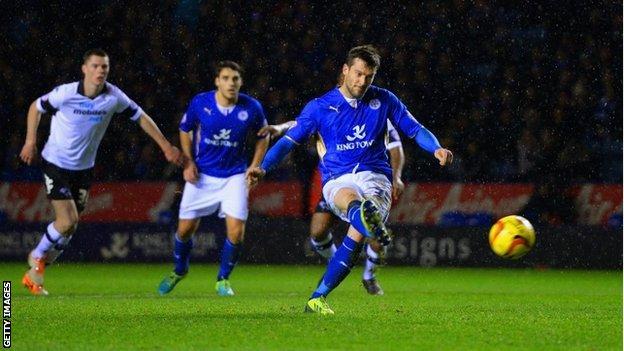 Leicester increased their lead at the top of the Championship table to seven points with a blistering attacking display and stylish victory over fellow promotion hopefuls Derby County.

Ritchie de Laet's fine individual goal rewarded City's early pressure and they could have led by five at half-time.

David Nugent's strike did make it 2-0 only for a De Laet own goal following a corner to give the Rams hope.

Leicester have now won eight of their last nine games against Derby in all competitions and have beaten them three times this season.

The margin of victory in a thoroughly one-sided promotion derby could and should have been far greater.

But having seen his side completely outplay one of the their main promotion rivals and make it eight wins in nine matches against the Rams, Foxes boss Nigel Pearson is unlikely to be concerned.

Derby showed a few brief glimpses of the intricate play that has so impressed and helped them to 10 wins from 14 league games under manager Steve McClaren.

But Leicester posed a much greater and more persistent threat, with their more disciplined 4-4-2 formation bringing plenty of joy out wide against Derby's midfield trio.

The direct running and sheer pace of Dyer was the standout feature of a brilliant attacking first-half display while the Rams also never looked comfortable against Leicester's lively front duo of Vardy and Nugent.

Vardy sent a clever first-time flicked effort just wide with the outside of his foot and Nugent was unlucky with an acrobatic effort that Grant did well to push away at his near post.

The pressure finally told 25 minutes in and the goal was full of quality. De Laet broke from right-back, beating two men and playing a neat one-two with Nugent on the way, before firing a fine low shot past Grant.

And the chances still continued to come, with Leicester hitting the bar twice in quick succession.

First Vardy was desperately unfortunate to see a strike from a tight angle hit the underside of the bar and bounce away to safety after Grant made a good save from Nugent's low strike.

And Liam Moore's towering header from a corner came back of the bar with Grant well beaten.

For all their dominance against a side who did not muster a shot on target but are the division's highest scorers, the lead was only 1-0 at the interval.

That changed almost immediately though and the home side side will feel they deserved the huge slice of luck that saw Nugent's shot rebound back off his legs and into the net.

The Rams brought on new loan signing Patrick Bamford and Mason Bennett up front and it helped bring their goal.

Bamford had a decent low strike blocked and from the corner that resulted the Rams dragged themselves back into the game when Jake Buxton's header was turned into his own net by De Laet.

But their hopes of an unlikely fightback were immediately hit as the Foxes broke from kick-off and Nugent coolly netted from the penalty spot after Craig Forsyth fouled Vardy to leave their boisterous fans in celebratory mood.

Vardy netted soon afterwards and Leicester cruised to victory with very few scares while the Rams were left to rue a missed chance to go second in the table.

"Derby are a good team but we got the balance right. We worked very hard and some of our attacking play was very, very good.

"When they got the goal back it was important we responded as quickly as we did because if we didn't then the feel of game may have been different.

"All in all it's a very good day for us. When you play ahead of the rest of the programme it's always nice to take advantage of it, and we played well and deserved it."

"Leicester are a very good team and top of table and on that performance you can see why, but we were well below our best - that wasn't the Derby team of recent months.

"But you can't maintain that sort of form all the time, you know you're going to have dips.

"To come to Leicester you need to be at your best, and tonight we weren't. It's a wake up call for us and a realisation that there's a long way to go."