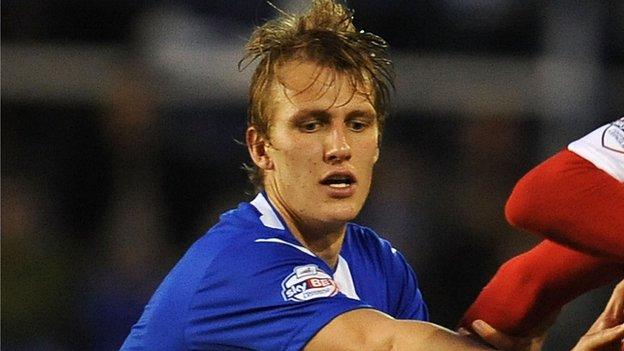 Birmingham City's on-loan defender Dan Burn has been recalled by parent club Fulham, so new head coach Rene Meulensteen can take a look at him.

The 21-year-old centre-half arrived at St Andrew's in July on a season-long loan and has started all but one of Birmingham's 24 Championship matches.

Burn, signed by Fuham from Darlington in April 2011, did not play a game under former boss Martin Jol.

However, Jol's successor Meulensteen wants to make his own assessment.

Meulensteen, who joined Fulham's coaching staff on 13 November, is still feeling his way in after taking over from the sacked Jol 18 days later.

My players can get a bit of a break now, which they deserve as they've been in every day over the festive period

Meanwhile, Blues have closed down their Wast Hills training ground for a couple of days in an attempt to eradicate the stomach and sickness virus from which Olly Lee, Lee Novak and captain Paul Robinson were suffering in the New Year's Day 1-1 home draw with Championship bottom club Barnsley.

"I don't want to go into too much detail, but we now have to keep them away as we don't want any more to go down with it," Blues boss Lee Clark told BBC WM.

Birmingham are helped by the fact that as a result of the Crawley-Bristol Rovers FA Cup second round replay being abandoned before Christmas and then being restaged on third round day on Saturday, they are without a game this weekend,

Clark's men are due to meet the winners at St Andrew's next Tuesday night.

"The cup tie is massive for us both financially and in terms of prestige, so we want everyone fighting fit," added Clark.

"My players can get a bit of a break now, which they deserve as they've been in every day over the festive period, and that is hard enough when they want to be with their families.

"We now have to keep them away from each other for 48 hours, and they can rest both mentally and physically."