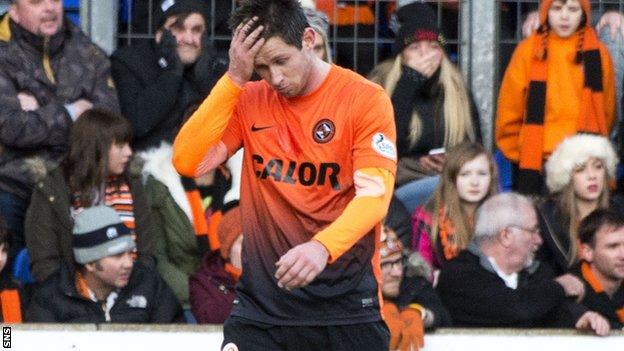 Manager Jackie McNamara insists that most of the eight changes he made for Dundee United's 3-0 defeat at St Johnstone were enforced.

"Injuries were behind it," McNamara explained. "A few of the boys were carrying knocks.

"It was a chance for others to come in and stake a claim but not many of them did it today.

"I can't fault the lads for effort but there were a lot of things that I wasn't very pleased about."

Stevie May grabbed a hat-trick for the Saints while the visitors finished with 10 men for the second match running.

Keith Watson was suspended after his red card in Paisley, while teenage playmaker Ryan Gauld was ruled out with a groin strain.

And McNamara said there were further fitness concerns to contend with.

"I took a gamble by putting (Gary) Mackay-Steven and (Stuart) Armstrong on the bench after they passed a fitness test this morning," he added.

"(Ryan) Gauld is out with a groin problem, Gavin Gunning is struggling with his knee and Keith Watson is obviously suspended after being sent off in the last game. So a lot of it was forced.

"The only one that wasn't forced was leaving out John Rankin for (Morgaro) Gomis. John has played a lot of games.

"Putting Mackay-Steven and Armstrong on the bench was a gamble and hopefully they'll be okay for Wednesday. I don't know how many of the boys will be fit for the Aberdeen game."

United had Calum Butcher sent off early on, with May converting the penalty given for the defender's wrestling, which came about following a poor headed back-pass from Sean Dillon.

And the home side went on to dominate the match as May helped himself to two more goals after the interval.

"The sending off killed us with that happening 15 minutes into the game and obviously them getting the opening goal from the penalty," said McNamara.

"It was the turning point of the game and I'm disappointed with the concentration at that point. I said to the players before the game that the main threat from St Johnstone would be balls from the corners or over the top, so we had to be switched on."