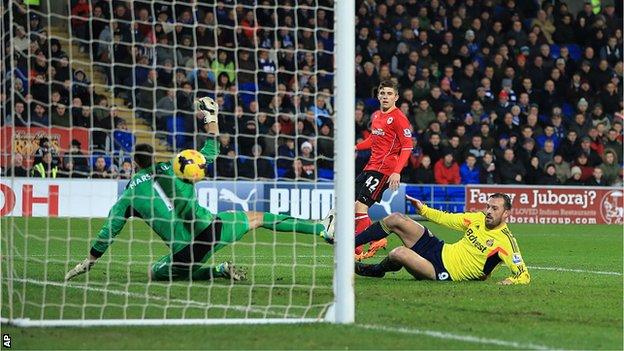 Cardiff City caretaker manager David Kerslake says he does not want the job permanently but expects to be in charge for their next game with Arsenal.

Kerslake took control for Saturday's after the club sacked Malky Mackay on Friday.

"I was asked by the chairman [Mehmet Dalman] to take the team on a temporary basis," said Kerslake.

"With all respect I wouldn't be interested in this job because I love being a coach."

Cardiff are understood to want a new manager in place as quickly as possible and hope to have someone appointed before their FA Cup third-round tie at Newcastle United on 4 January.

Former Manchester United and Norway striker Ole Gunnar Solskjaer, currently in charge of Molde, is thought to be Cardiff's preferred choice to take over as permanent manager.

Until then Kerslake says he expects to be in charge, adding: "No-one's told me I won't be in charge for Arsenal [on New Year's Day]."

Kerslake, who followed Mackay to Cardiff from Watford when the Scot was appointed in 2011, says his former boss understands his decision to stay on at the Welsh club.

"It's the nature of the business and I've been in it a long time now, so you just get on with it," said Kerslake.

"Of course [there's mixed feelings] but Malky understands football as well. We'll deal with this and we'll move on."

It seemed as though Kerslake's first game in charge would end in victory after Jordon Mutch and Fraizer Campbell struck to give Cardiff a healthy 2-0 lead against Sunderland.

But the Black Cats, bottom of the Premier League and four points behind their hosts, staged a remarkable recovery in the last few minutes of the game at Cardiff City Stadium as goals from Steven Fletcher and Jack Colback earned them a point.

Kerslake admitted the off-field upheavals could have unsettled the Cardiff players, but was proud of the way in which they responded on the pitch.

"They're only human, they've probably been on the phone and talking about it but they've come out of the traps today; they certainly put that behind them," he said.

"We asked for a fast start, get on the front foot, but that's something they've been used to - the previous manager has asked that from them and they've come out all guns blazing.

"Certainly for the first 35-40 minutes we blew Sunderland away, but second half Gus [Sunderland boss Poyet] has sort of reshaped his team and they had the lion's share of possession and put us under the cosh.

"The disappointing thing in the second half is that we didn't keep the ball as well as we should have and took the sting out of the game... we should have dealt with that.