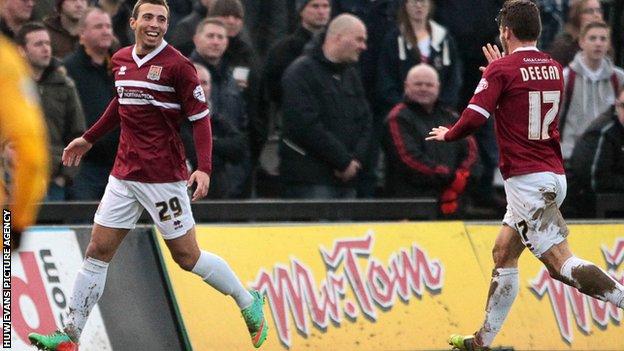 County equalised when Harry Worley headed in a corner before Darren Carter's fine left-foot shot put the Cobblers ahead after the break.

"I thought the front two were magnificent. German showed pace and energy. Hallam Hope hasn't been out on loan before, so it was new to him, but he scored a goal.

"If Darren Carter plays like that, he's my kind of player. And I didn't get a left-back in because I wanted to make a place for Ben Tozer. He deserved to be in the team.

"I thought we deserved some luck. We've been on a bad run. They earned it, but it wasn't a lucky result.

"I've always really been a manager but there's been no discussion (about full-time job). We know they've probably spoken to people. I've made their choice harder but I've made it easier for the man coming in, if there's another choice, because there's a chance of getting Northampton out of this position."