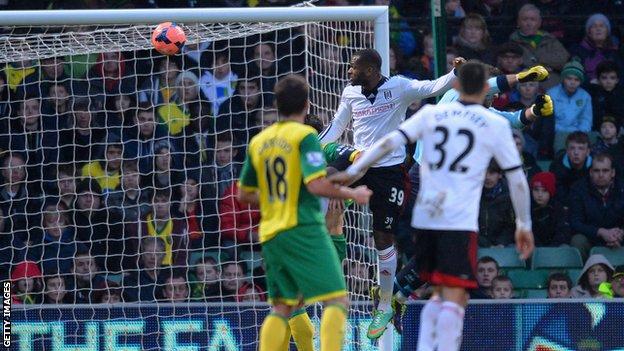 Darren Bent scored his first goal since October as Fulham claimed a 1-1 draw at fellow Premier League strugglers Norwich in the FA Cup third round.

After wasting an earlier chance, Bent nodded past the stranded Mark Bunn.

Norwich had started brighter and drew level on the stroke of half-time through Robert Snodgrass's header.

Canaries record signing Ricky van Wolfswinkel should have scored with a header after the break but neither side could force a winner to avoid a replay.

The clubs had met in the Premier League as recently as Boxing Day when Fulham claimed a 2-1 win thanks to Scott Parker's late goal, but this was their first clash in the FA Cup for 106 years.

As expected, the managers made a raft of changes after a hectic Christmas schedule. Among those was a first start for Clint Dempsey in his second spell with Fulham after re-joining on a two-month loan deal from Major League Soccer side Seattle Sounders.

The Canaries had enjoyed the better start at Carrow Road, with Josh Murphy shooting over from outside the penalty area and Johan Elmander firing a rebound a foot wide of the post.

Despite Norwich's pressure, the best chance of the early stages saw Cottagers' striker Bent played through on-goal by Pajtim Kasami only for goalkeeper Bunn to deny him.

Bent was not to be kept out 10 minutes later as he rose above the flat-footed Bunn to head Fulham into the lead. The effort was the Aston Villa loanee's first since he struck the only goal in the top-flight meeting with Stoke on 5 October.

Who: Cousins Martin and Paul Allen, who both played for West Ham, will make the draw after the Hammers face Nottingham Forest.

Fourth round dates: Ties to be played over the weekend of 25 and 26 January 2014

Norwich had controlled the first half and were not behind for long. Snodgrass capitalised on some poor goalkeeping from ex-Ipswich loanee David Stockdale after excellent wing-play from the dynamic Murphy to stoop down and nod in the equaliser.

Stockdale excelled after the break, however, as he pulled off a tremendous low stop to keep out a header from Van Wolfswinkel, who was making his first start since October following a toe injury.

Snodgrass then came close to a second as his free-kick rippled the side-netting.

Norwich continued to look the most likely to score in the final stages, but Steven Whittaker's low effort across goal agonisingly evaded the touch of a team-mate to ensure the relegation-threatened pair had to settle for a cup draw.

"Wes [Hoolahan] reported an injury yesterday and at this moment is having treatment. There has been no bid that I am aware of, absolutely not.

"It's not our intention to lose players, our intentions are to strengthen what we have got here and to make sure we get these players back fit."

"We didn't want it [a replay], I think Chris [Hughton, the Norwich boss] didn't want it either, but that's how it turned out. A draw's a good result away from home.

"David Stockdale had a Gordon Banks-like save to keep us in the game.

"It was definitely one of the best saves I have seen. It was a fantastic cross by [Javier] Garrido and a great leap by Van Wolfswinkel."

Check out a photo gallery from all of today's FA Cup fixtures on the BBC Sport Facebook page.