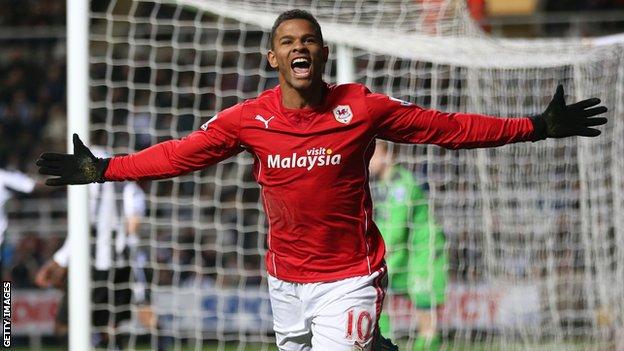 New Cardiff City boss Ole Gunnar Solskjaer masterminded the Bluebirds first win at Newcastle in 51 years as goals from Craig Noone and Fraizer Campbell completed a superb comeback in the FA Cup third round.

Solskjaer made his name as a deadly substitute striker at Manchester United and he introduced Noone and Campbell in the second half to earn Cardiff a place in the fourth round for the first time in four seasons.

Papiss Cisse followed up Moussa Sissoko's effort to score in the 61st minute after Hatem Ben Arfa had hit the woodwork either side of half-time.

But Cardiff were transformed by their replacements as Campbell hit the post before Noone fired in from long range a minute after coming on.

And Solskjaer's former Manchester United team-mate and ex-Sunderland striker Campbell ended a four-game winless run for the Bluebirds with a header 10 minutes from time.

It is the first time that Cardiff have beaten the Magpies in the FA Cup and the result will give the club a huge boost after a difficult period following the sacking of former boss Malky Mackay on 27 December.

Solskjaer and the FA Cup

Ole Gunnar Solskjaer won the FA Cup with Manchester United in 1999 and 2004. The 40-year-old's last taste of the competition prior to this game was the 2007 FA Cup final when Chelsea beat United at Wembley.

It is too soon to say whether replacing Mackay with two-time FA Cup winner Solskjaer was the right decision by owner Vincent Tan because Cardiff, sitting just a point above the bottom three in 17th position, face a tough task to lift their Premier League relegation worries.

But there were plenty of signs in this game that he can build on a positive approach with funds promised to him by Tan in the January transfer window.

The visitors looked like they were heading for defeat before Solskjaer's substitutions as the hosts cranked up on the pressure on David Marshall's goal.

However, in front of a crowd of 31,166, Alan Pardew's much-changed team could not add to Cisse's goal and they have now lost their last three games.

Solskjaer, who was appointed on 2 January, made five changes to the side that lost to Arsenal on New Year's Day and they showed controlled possession and had several chances to take the lead early on.

However, in keeping with being the joint lowest scorers away from home in the Premier League, they failed to profit as Don Cowie, Kevin McNaughton and Kim Bo-Kyung wasted good opportunities.

Mark Hudson did find the back of the net from a corner, but his header was ruled out for pushing in the box.

Ben Arfa was one of seven Newcastle changes and his influence grew through the first half, culminating with the French winger cutting in from the right to hit a firm shot against the post from 20 yards.

Who: Cousins Martin and Paul Allen, who both played for West Ham, will make the draw after the Hammers face Nottingham Forest.

Fourth round dates: Ties to be played over the weekend of 25 and 26 January 2014

That sparked a better period for the hosts, as Cardiff became sloppy with their passing, and Ben Arfa again hit the woodwork early in the second half when his right-footed shot looped onto the top of the crossbar via a Marshall save.

Solskjaer attempted to wrestle control of the game by introducing Campbell.

But his side went behind within a minute as Sissoko latched onto Yoan Gouffran's through ball and although his shot was blocked, Cisse followed in for his third goal of the season.

Campbell did have an impact as he hit the post after 70 minutes, but it was eclipsed by the contribution of Noone, who collected the ball with his first touch before lashing in from 30 yards.

Campbell was not to be denied, though, as he headed in Peter Whittingham's corner 10 minutes from time.

Although Ben Arfa again went close, it was a smiling Solskjaer who celebrated with his team in front of the travelling fans at the final whistle.

Check out a photo gallery from all of today's FA Cup fixtures on theBBC Sport Facebook page.

View all 23 The FA Cup results