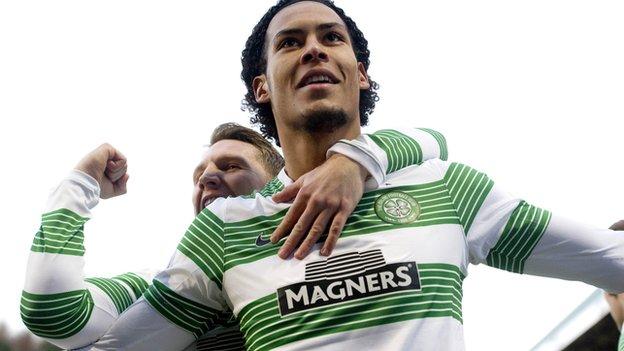 The Dutch defender left a trail of blue shirts in his wake as he waltzed his way forward from his own half to knock in a composed finish on five minutes.

"He's only 22 and he's going to get better, his all round game is very good at the minute," said Lennon.

"Defensively, he has been fantastic for us; he's a technically gifted footballer and a great athlete."

Celtic dominated the remainder of the first half but could not add to their lead, while Saints' Alan Mannus made a great late save to deny Kris Commons.

"We never get it easy here but I thought we played very well in the first half and scored a wonder-goal," added Lennon.

"I'm glad we are talking about that to win the game because it was exceptional."

Celtic are now 11 points clear at the top and remain unbeaten in the Premiership.

"That's five clean sheets in a row, so we are doing something right," continued a satisfied Lennon.

"We'd have dropped points at this time last year. There's more of a will to win about us now.

"At times it's not pretty but you can't always play silky football the way you'd like.

"We were a bit ragged for 10-15 minutes at the start of the second half but the last half hour we were in control again.

"Some of our players have played 35 games already - that's a season for most - and we're not even out of December.

"There are only a few clubs left in Europe unbeaten (in the league) and we want to preserve that for as long as we can.

"That takes physical and mental strength - and they have shown both in abundance.

"What we'll do now is rest and recover. We have another big game against Inverness on Sunday."

Lennon is keen to bolster his squad next month and indicated that the club has made progress on one of their transfer targets.

"We have made strides on trying to get one player in but nothing is confirmed on that," he said.