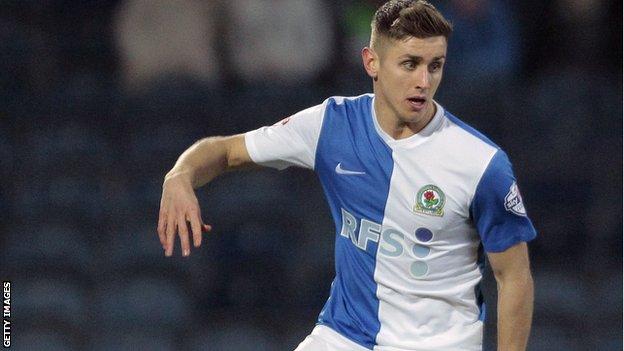 Cairney, 22, on loan from Hull, laid on first-half goals for Jordan Rhodes and Rudy Gestede.

Rhodes scored in the 13th minute with a right-foot shot from the right side of the box into the bottom-left corner.

Gestede headed into the same spot from close range in the 36th minute, before Matt Smith fired home for Leeds after 52 minutes following a defensive error.

Leeds had the first chance after just 11 seconds when captain Rodolph Austin's 25-yard shot was deflected behind.

Blackburn took the lead after Cairney beat the Leeds offside trap and played the ball in behind their three centre-halves.

Rhodes was in the clear and fired confidently past Paddy Kenny.

Rovers had further chances from Lee Williamson and DJ Campbell before doubling their lead.

Cairney, who is now heading back to Hull, crossed following a corner and Gestede planted his header past Kenny.

Blackburn had a penalty claim turned down when Gestede went down under a challenge from Luke Murphy.

Leeds dragged themselves back into the game seven minutes after half-time following an error from left-back Tommy Spurr.

He went to sleep following a poor back-pass from Ross McCormack. Sam Byram dashed in to set up Smith to tap into an empty net.

Leeds had a penalty shout when McCormack was brought down by Williamson. Then, at the other end, Campbell went over after a challenge from Marius Zaliukas.

Smith had two efforts cleared off the line and Alex Mowatt hit the bar for Leeds and, with under 10 minutes left, Rhodes headed against the bar for Rovers.

"We have to improve the squad; I have to, we have to try and bring in two, three, four players who can come in and play. That is really important.

"We need players who know the level and have played in this league before. We know that and we have to try and find them.

"We are looking a bit leg weary but we are squeezing all we can out of the players and they are doing all they can. I have already spoken to someone and it would be good if we could do something."

"[Hull manager] Steve Bruce must be sick of my number coming up on his phone. Tom is a Hull player and we must be respectful of that but Steve has been great to allow Tom to come here with us.

"He [Jordan Rhodes] increases his value with every goal but the owners don't want to sell him, it's as simple as that. You can never say never at any price, look at Ronaldo or Gareth Bale with a monster, monster bid. But we are in no rush.

"I would expect a lot of interest but I would expect interest in a lot of players. Jordan has a good relationship with everyone at the club and wants to get to the Premier League with Blackburn."