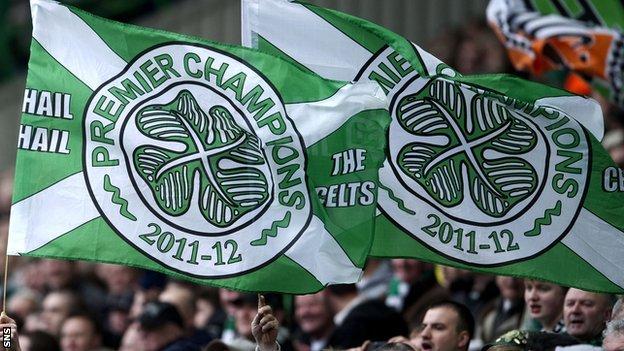 St Johnstone have announced that a proposed ban on flags and banners at their Boxing Day clash with Celtic has been lifted.

Celtic prematurely made the same announcement on Monday after the ban was announced 24 hours earlier.

But the Perth club have now confirmed that police have allowed a relaxation for the McDiarmid Park fixture.

Police Scotland had recommended a ban to prevent fans using flags to hide the use of flares and smoke bombs.

A statement from St Johnstone read: "Further discussion has today taken place between all parties and a request from the clubs made to Police Scotland that the ban be lifted has been accepted."

It added safety remains of "paramount importance" and urged supporters to "support their respective teams in a manner which befits what should be a great game of football on a special date in the football calendar".

The statement added that a "rigorous search policy" will be in place ahead of the 15:00 GMT kick off in Perth.

Match commander, Supt Kevin Lynch, said: "Following further discussions with both football clubs and ourselves and having taken the views of supporters' associations into account, we support the decision taken by St Johnstone to allow flags and banners at this fixture.

"Police Scotland will continue to work with both clubs to ensure everyone enjoys the game in true festive spirit in a safe and considerate manner.

"As with all fixtures, alcohol, containers, smoke bombs and pyrotechnic flares are not permitted in the ground and again, appropriate action will be taken against anyone in possession of such items who is breaching ground safety regulations or involved in any criminal activity."

A match between Motherwell and Celtic at Fir Park on 6 December was marred by pyrotechnics being set off and damage to more than 250 seats in the away end, while there have been several other incidents involving smoke bombs at Scottish grounds this season.

Celtic mistakenly issued a statement on Monday saying the ban had been lifted and it was removed from the club website on Tuesday morning.

The Scottish champions admitted they had jumped the gun with their statement but welcomed the confirmation of the decision.

A spokesman for the club said: "For clarity, Celtic Football Club has received confirmation that flags and banners will now be permitted at the match against St Johnstone on Boxing Day.

"Last week, Celtic Football Club noted the advice given by local police regarding safety, flags and banners at the match.

"We acknowledge we had not received final confirmation yesterday in terms of a change. However, we are pleased, following consultation and discussion over the past couple of days, that the initial decision has been reviewed by the police and St Johnstone FC."