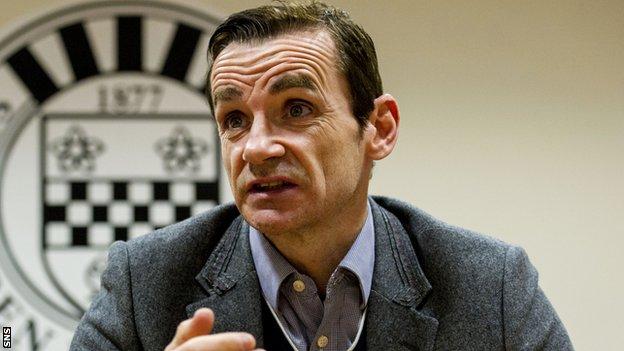 Danny Lennon has challenged his St Mirren side to embark on a winning run over the busy festive period.

"We've had a taste of what a poor run is like and we know how quickly the situation can evolve," said Lennon.

"We want to get back to winning ways as soon as we can and pick that momentum back up."

Lennon has been impressed by United this season and said the form of Jackie McNamara's side illustrates what a confident side is capable of.

"That's what winning games does for you. Losing games brings out a different side," he added.

"We've been there as a group and I've told the players that we are not going back there. It's about making sure you take a professional pride in what you do."

"It's six straight wins and 22 goals scored in the process; absolutely incredible. It will be a stern challenge for us defensively.

"We have to respect what they are doing, with the dynamics and movement of their play. From middle to front they are dangerous and their full-backs love to go forward too.

"They have high energy and Jackie deserves a great deal of credit for inheriting these players and turning them into high-impact SPFL players.

"But like any opposition we look at where their strengths are. But you can also find weaknesses and it's about trying to counteract their good points and exploit the others. What is important for my team is that we play to our strengths.

"When we go out and stick to a game plan, we are a good team. But when we abandon those principles we are a bad team."