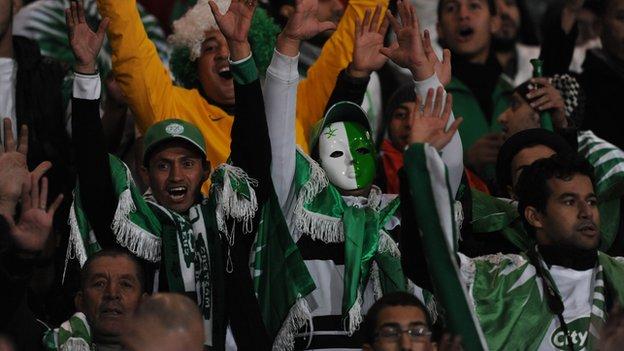 Although Raja were beaten 2-0 by German giants Bayern Munich, their spectacular run to the showpiece match, which saw them overcome the champions of Oceania, Central America and South America, has significantly raised their profile.

After victories against Auckland City and Monterrey, Raja pulled off their biggest upset by beating Brazil's Atletico Mineiro 3-1 in the semi-finals.

But reigning European champions Bayern proved too good at the Stade de Marrakech on Saturday, with first half strikes from Brazilian centre-back Dante and Spanish starlet Thiago Alcantara securing a fifth trophy of the year for the Germans.

However, the 24-year-old Zaari told BBC Sport: "We made a great statement for Raja to people all over the world that Moroccan football is up and coming, with some great talent.

"Immediately after the match we said as a team we had to be proud of what we represented here," said the Raja number two.

"We gave it our best. It wasn't enough to reach first place but I think second is good enough."

Moroccan football has had little to cheer in recent times, but Raja's surprise performance at the Club World Cup has inspired the country and the team itself.

"It has been a great experience and I want to experience it again," the Dutch-born Morocco international added.

"We have to win the league if we want to participate it in next year. Now we know what we are playing for, it will give us great motivation."