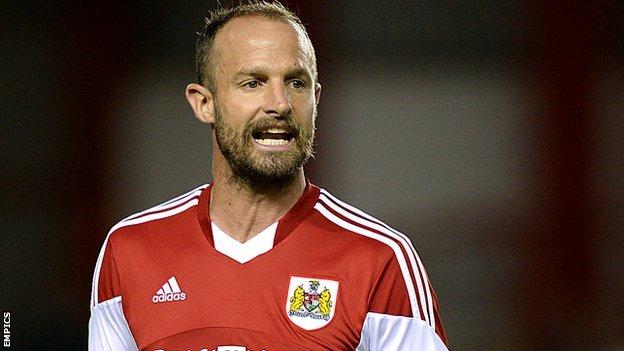 The 36-year-old matched the achievement of John Atyeo by playing his 645th game for the club on Saturday.

But his celebrations were dampened after City conceded a late penalty against Notts County to draw 1-1, which kept them bottom of the table.

"I'd rather we got out of the relegation zone," he said.

"It's hard at the moment because of the position we're in. I don't want it to be all about me.

"At this moment in time we've got bigger things to think about."

The Bristol-born centre-back started the season three games short of the record and after a long spell out through illness, and two brief appearances as a substitute in cup fixtures, made his first league start of the campaign on Saturday.

"It was nice waking up, knowing I was in the team with the chance to equal the great John Atyeo's record," he told BBC Radio Bristol.

"It's also my wedding anniversary and to top it off with three points would have been nice. But for whatever reason it wasn't meant to be."

England international Atyeo played for Bristol City between 1951 and 1966 and, prior to being matched by Carey, held both the appearance and goal-scoring record at Ashton Gate.

Apart from a six-month spell at Coventry in 2004, Carey has spent his entire 18-year career at his hometown club, where he came through the academy system.

He added: "If it wasn't for the team behind me - that's friends, family, managers, fans and all the players I've played with - it wouldn't have been possible."