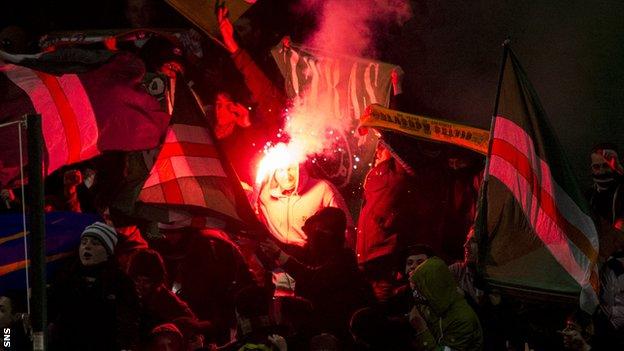 St Johnstone have banned fans from taking flags and banners inside McDiarmid Park for the Boxing Day fixture against Celtic.

Both clubs are working with Police Scotland to prevent pyrotechnics being smuggled into the ground.

"A decision has been taken that flags and banners will not be permitted," St Johnstone said.

Police Scotland will "deal effectively with anyone who is involved in disorder or other criminal behaviour".

The Perth club added: "As with all fixtures, alcohol, containers, smoke bombs and pyrotechnic flares are not permitted in the ground and again, appropriate action will be taken against anyone in possession of such items who is breaching ground safety regulations or involved in any criminal activity."

The club also confirmed that stop-checks would be carried out on supporters' buses en route to the game.

Seats in the South Stand were damaged while smoke bombs and flares were also thrown during Celtic's 5-0 win.

Rangers issued an indefinite ban to a teenager charged with throwing a flare during a match with Falkirk.

The flare damaged the artificial surface at the end of Rangers' Scottish Cup victory at Falkirk's Westfield Stadium on 30 November.