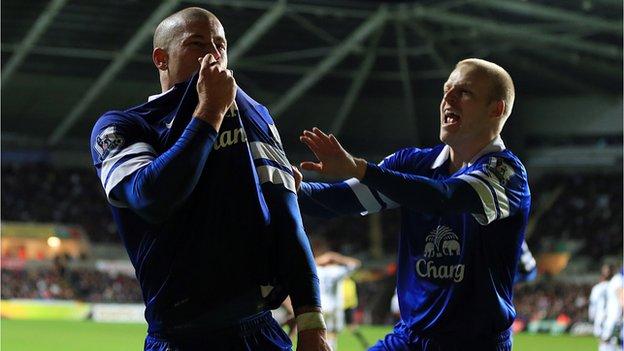 The 20-year-old, who has three England caps, curled home a late free-kick to earn the Toffees a 2-1 Premier League win at Swansea on Sunday.

Everton manager Roberto Martinez added: "He is a quite incredible diamond of English football."

Barkley, who joined Everton as an 11-year-old, made his England debut in the 4-0 World Cup qualifying win over Moldova in September.

He has played in all but one of Everton's 17 Premier League fixtures this season and secured the points in eye-catching style six minutes from time at the Liberty Stadium as Martinez's side moved into the Champions League qualification places.

"Love watching Barkley play," added Lineker. "Brings a smile to my face and is proof that, if they're good enough, young English players will emerge."

Barkley's form has mirrored that of his team's this season, as Everton boast the fewest defeats and meanest defence in the Premier League.

"Ross is growing game by game and he is showing different aspects of his play," said Martinez. "A lot has been said about Ross, but it's always an understatement.

"He's an incredible listener and young man with a lot of potential. He always comes up with something different in a game to show he can develop.

"I'm proud of seeing him grow, he's a player who gets fed by feelings, a natural talent who can play in any position."

Barkley scored twice for England's Under-17s on their way to victory at the 2010 European Championship and also featured in the under-20 side that did not get past the group stages at this year's World Cup.

But after impressive early-season form, including an opening-day goal at Norwich, senior boss Roy Hodgson handed him full caps against Moldova, Chile and Germany.

"The talking point in Everton against Swansea was Ross Barkley," said BBC Radio 5 live pundit John Hartson. "He is good enough to play for England in every game on this evidence."