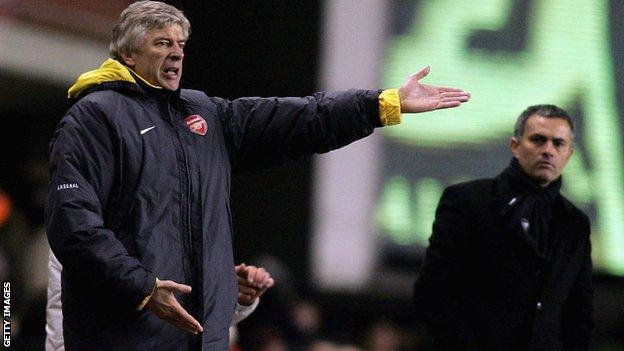 Wenger has yet to beat the Portuguese in nine attempts, most recently losing a Capital One Cup fourth-round tie 2-0 at home to Chelsea in October.

But victory over the Blues at the Emirates Stadium on Monday will take Arsenal back above Liverpool to the top of the Premier League table.

"It is not a personal battle," Wenger said.

"Honestly, we had some big games in the past, but what is important for me is that I am completely focused on Arsenal Football Club and on my team and doing well in the team.

"Whether we play Monday night against Chelsea or anybody else, for me it is exactly the same, because what is at stake for us is to get back to winning habits."

The relationship between the two managers has been fiery in the past, with Wenger being called a "voyeur" by Mourinho in 2005 over comments made about events at Stamford Bridge.

"Once you are out of competition, everybody is different," said the Frenchman, whose side have been the early Premier League pacesetters before a draw and a defeat in their last two games saw them overtaken by Liverpool.

"We have spent time together in Geneva at the Uefa managers' meeting.

"Here is competition time, so everybody fights for his team and his club."

Mourinho also played down the significance of his record of five wins and four draws against Wenger.

"It's not me against Wenger," said Mourinho, whose side would draw level on points with leaders Liverpool with a win.

"It's my Chelsea against his Arsenal. And [the record] doesn't play Monday. It has no influence. That stat, for the game on Monday, means nothing.

"I just feel that we played better, we deserved more and we won these matches.

"In my time I remember just one game where we were close to losing, which was a game at home where (Michael) Essien scored the equalising goal in the last part of the game (in the December 2006 Premier League draw).

"My memories are that against them we played very good matches. As a consequence of that we got good results."