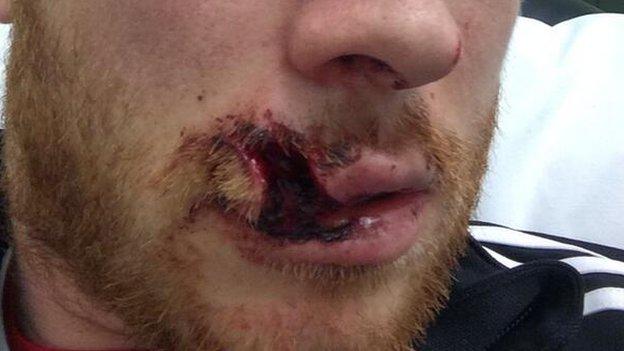 Aberdeen are hopeful that Mark Reynolds will recover from injury to face Motherwell on Boxing Day despite being stretchered off in Inverness.

Reynolds was taken to hospital to have the gash to his top lip stitched, but the 26-year-old

Can't believe I got subbed off for this wee cut. Think my modelling days could be over before they have even started

Fellow defender Andrew Considine is also on the road to fitness.

He missed the match in the Highlands with a calf injury that was detected on Friday.

Considine will have a scan on the injury this week, but the Dons do not believe it is too serious and hope to have the 26-year-old back within a couple of weeks.

Without Reynolds and Considine, Aberdeen would be left short of defensive cover going into the crucial turn-of-the-year period.

Another centre-half, Michael Hector, will return to parent club Reading after Aberdeen's match at Kilmarnock on 5 January.

Full-back Clark Robertson is already out of action long-term.

Dons manager Derek McInnes said after the win at Caledonian Stadium: "Mark had to go to hospital for stitches.

"It was a blow to lose him against Inverness because he's such a big player for us.

"He's got a nasty gash in the roof of his mouth and also on his face.

"Andrew Considine picked up a knock against St Mirren and even though he managed a bit of training during the week, he wasn't fit enough to play at Inverness.

"We'll see how he is this week, but it looks as though he's got a tear in his calf."

Reynolds posted photographs of his injury, before and after his stitches, on social network site Twitter.

"Can't believe I got subbed off for this wee cut!" he joked.

"Think my modelling days could be over before they have even started."