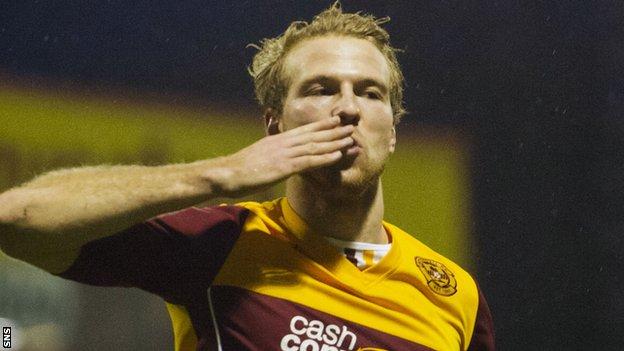 Henri Anier says his two-goal display against St Mirren was inspired by Henrik Ojamaa but fears he may have to follow his friend out of Motherwell.

Estonia team-mate Ojamaa, was back in Scotland to visit his fellow striker.

"He told me I was going to score two, so I did," said Anier, who would like

"They won't accept this I think because I would be free in the summer, so maybe something else can happen."

It was nice to see Henrik and I just hope he can make Pittodrie. If he can do that, we'll take him up there with us

It is unlikely that Motherwell, hampered further financially after an early Scottish Cup exit, would be able to pay a transfer fee to secure the 23-year-old permanently.

And manager Stuart McCall has indicated they would also have a problem should Viking demand that the Fir Park outfit increase their contribution and pay his full wages to secure an extended loan beyond January.

But Anier, who had a previous loan with Fredrikstad after joining Viking from Flora Tallin, thought there was still time for the clubs to come to an arrangement even though his agent had been quoted as saying there were other clubs interested.

"Obviously I've been around a few clubs and it would be nice to stay or get something permanent, or at least to stay until the end of the season," he said.

"I've really enjoyed my time here. It is between the clubs and I can't do anything and I hope something can get sorted out in the next two weeks.

"I don't know about extending the loan because I've got one more year back at Viking, but my agent knows more than me and it's between the clubs.

"My loan finishes in the middle of January, so we still have time."

"I am happy with two and to get back to winning ways," he said.

"It felt really good when I was on the pitch. I think we played brilliant as a team as well.

"That could be one of my best performances for Motherwell."

McCall thought Ojamaa's presence had helped get the best out of Anier and hoped that the striker's form would continue against Aberdeen on Boxing Day.

"Did he tell you why he did well? Mr Ojamaa," he joked.

"Henrik came over to stay with Henri for a few days and we had some lunch on Friday.

"He said they would go back and they would analyse his performance. I said, okay, you do that and make sure he comes and scores some goals tomorrow.

"It was nice to see Henrik and I just hope he can make Pittodrie. If he can do that, we'll take him up there with us."