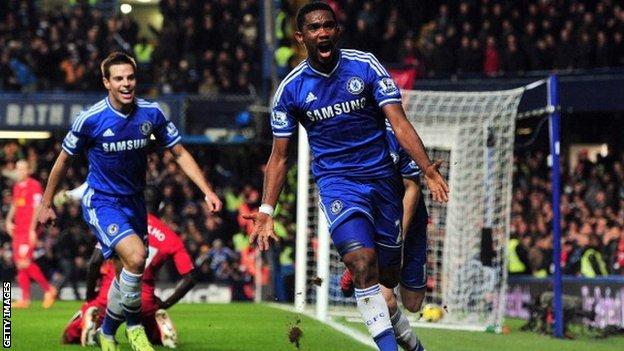 Chelsea end the year just two points behind Premier League leaders Arsenal after an impressive performance against a Liverpool side which has now suffered successive league defeats.

The visitors were ahead within three minutes as Martin Skrtel tapped in.

But parity was restored when Eden Hazard rifled in from distance.

Chelsea deservedly went ahead before the break when a Samuel Eto'o shot crept underneath Simon Mignolet, though the visitors had chances to level.

A Mamadou Sakho header struck the crossbar, while Luis Suarez was denied what seemed like two strong penalty appeals with first John Terry and then Eto'o impeding the striker.

The last time these two sides met, Suarez, in the words of manager Brendan Rodgers, reached the lowest point in his career. The Uruguayan's rehabilitation since he bit Branislav Ivanovic's arm in April has been remarkable, with the striker scoring 19 goals this season.

But Chelsea shackled Liverpool's chief tormentor in a performance which saw the Londoners outmuscle and overpower their opponents.

Rodgers' side, who topped the table on Christmas Day, are now in fifth after defeats and Chelsea, and the Merseysiders must hope Rodgers can guide his team to victory over Hull on New Year's Day to maintain their hopes of a top-four finish.

Liverpool could not have wished for a better start as Skrtel side-footed in at the near post. The defender reacted quicker than anyone in a blue shirt as Suarez nodded on Philippe Coutinho's free-kick.

It was a free-kick awarded for a clumsy shin-high tackle by Eto'o on Jordan Henderson. The striker was fortunate to escape without further punishment and, to Liverpool's annoyance, he would later go on to make his presence felt in a number of ways.

Chelsea's response to going behind was to surge forward relentlessly.

Gary Cahill went a fraction wide with a bullet of a header, Hazard had a penalty appeal turned down, while an acrobatic save from Mignolet prevented Frank Lampard from finding the top corner.

The hosts were dominating the midfield and there was a sense of inevitability about Hazard's leveller. Although, arguably, the visitors could have cleared the danger as Oscar's pass ricocheted off Sakho's shin and fell kindly to the Belgian, who clinically found the top corner for his eighth goal of the season.

Hazard's virtuosity combined with the ballast provided by Lampard, David Luiz and Willian in the middle of the pitch forced Liverpool into uncharacteristic rash passes.

A second goal was no more than Chelsea deserved, with Oscar's cut back finding Eto'o, though Liverpool's goalkeeper should have dealt better with the Cameroonian's first-time shot across the goal.

The first half belonged to Chelsea, but, after the break, the visitors showed glimpses of the effervescence which had seen them score 13 goals in their last four games.

Sakho directed Jordan Henderson's chipped pass towards the woodwork, a Suarez half-volley forced Petr Cech into action and then came the first penalty appeal as John Terry clambered on top of Suarez.

In between a flurry of Liverpool chances, Mignolet came to his team's rescue, preventing Eto'o from grabbing his second of the match, but it was the visitors who finished the stronger.

An alert Cech dived low to stop Glen Johnson's dipping strike and, as the game neared a conclusion, Eto'o was fortunate to escape punishment after needlessly making contact with Suarez inside the box.