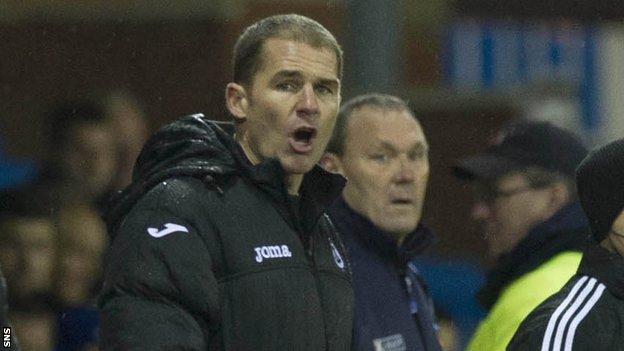 The Jags recovered from being a goal down, but succumbed to defeat when Kris Boyd diverted a long-range effort into the net.

"I said to the lads that we're still in a good position, but we have to start taking chances," said Archibald.

"Especially away from home, you can't play like that and not win the game."

It's important that we keep the morale up, I would like to think we'll get the break

Chris Johnston gave the hosts a half-time lead, which was cancelled out after the restart when Kris Doolan fired past Killie's Craig Samson.

But Boyd landed a touch on Jackson Irvine's long-range shot in the 73rd-minute to secure the win, and Archibald felt his side could have taken something from the match.

"I thought we created enough chances to go and win the game.

"We missed two one-on-ones with the keeper, which I've been saying every week we can't keep doing in this league, because as soon as we missed it they went up the park and scored from a much harder chance."

Up next for Thistle are two crucial matches at Firhill, with Inverness Caledonian Thistle on Boxing Day and Motherwell four days later.

Archibald believes his players are starting to find their feet in the Scottish Premiership, despite the defeat away to Kilmarnock, and he has impressed upon his squad the importance of taking points from the two forthcoming home games.

"We've been learning all season, and we are still learning from it," said Archibald.

"We've got to stay strong as a group. We're playing well and creating chances, but we have to big home games coming up and we have to take points from them.

"It's important that we keep the morale up, I would like to think we'll get the break.