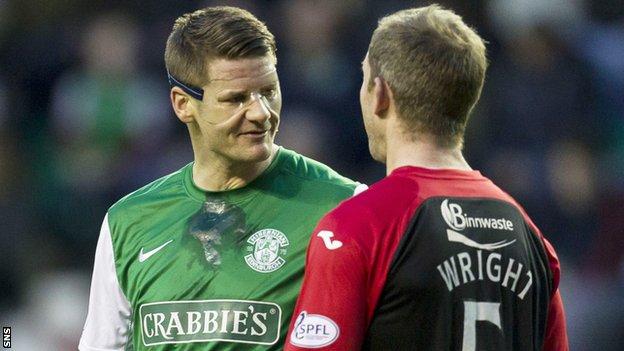 Manager Terry Butcher expressed concerns about Hibernian's "fear of winning" after a frustrating 0-0 draw at home to St Johnstone.

The visitors played with 10 men for an hour due to Patrick Cregg's red card but Hibs could not profit.

"As soon as the red card came out it was St Johnstone's best spell in the game," said Butcher.

"We sat off and you could see the lads thinking 'we're expected to win this' - it's a fear."

We dominated the game but we just couldn't put the ball in the net. It wasn't for the lack of trying

Hibs, who remain seventh in the Premiership are the league's lowest scorers and have only found the net twice in their last nine outings.

Butcher, serving a touchline ban, looked on from the stand as Hibs pressed throughout the second half but Saints keeper Alan Mannus only made two good saves - keeping out a deflection from team-mate Gary McDonald and an injury-time header from James Collins.

"We dominated the game but we just couldn't put the ball in the net. It wasn't for the lack of trying," said Butcher.

"The boys worked hard and got into some good positions, it's just the confidence to take the ball into the box or to take shots - you can see it's just not there.

"Not having had many wins at Easter Road this year or scored many goals, it's the same old story.

"You can't repair what's been going on for quite some time here in four or five games. If I did that, it would be miraculous.

"We need that bit of quality around the box. We didn't work them enough, so I'm disappointed with just the point.

"When the fans see a team go down to 10 men they expect a cricket score but that seldom happens because the 10 men defend like mad and St Johnstone, to their credit, defended heroically.

"And when we did get through there was Alan Mannus throwing himself around left, right and centre.

"But we didn't test him enough and that's something we need to work on.

"We'll just crack on. We have three or four matches before we can do anything in the window.

"What we are looking at is taking steps forward and trying to increase confidence through a good run of games."

There were loud claims for a penalty in injury time when Collins appeared to have his shooting leg caught by Tam Scobbie, with the Hibs striker saying later it was a "definite penalty".

However, Butcher was not convinced.

"I've looked at it a couple of times and I'm not so sure," was his verdict. "It probably could be given but [referee] Alan Muir had a good view of it."