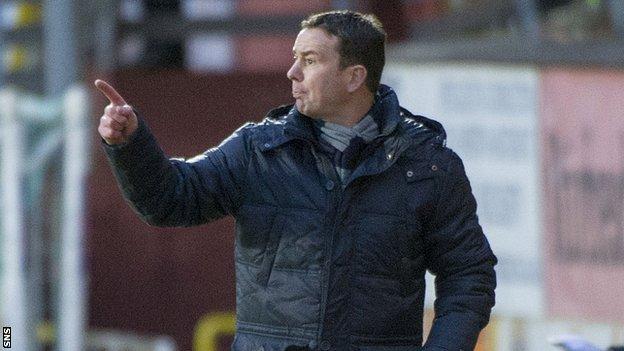 Ross County boss Derek Adams said he was disappointed to lose 1-0 against Dundee United at Tannadice, but was pleased to have avoided a heavier loss.

United had won their preceding five matches with four goals or more, but could only manage one at home to County.

"A lot of teams have been heavily defeated by Dundee United this season," said Adams.

"I'm just delighted we put up a good show."

We caused them a few problems, which we knew we could - but Dundee United are playing with a lot of confidence

Gary Mackay-Steven's 69th-minute strike separated the sides in a match that United dominated for large spells, but County managed to keep the scoreline respectable.

The defeat means County have not won a match since October and find themselves at the foot of the Premiership table with 11 points, 14 ahead of basement club Hearts.

Despite the run of poor form, Adams commended United's quality of play in Saturday's match and insisted his squad are working hard to restore their form.

"I think the players are disappointed to come away with nothing, because we kept Dundee United very quiet from the point of view that they hadn't scored any goals up until we made a mistake," said Adams.

"We played well, but Dundee United were excellent at times.

"Obviously, they've got the quality throughout their side, but we started well, and we were on the front foot.

"We caused them a few problems, which we knew we could - but Dundee United are playing with a lot of confidence.

"I thought Andrew Robertson was man of the match today. They were stronger coming down the slope and going in to their home fans.

"We played at our maximum, and I can ask nothing more of the players."