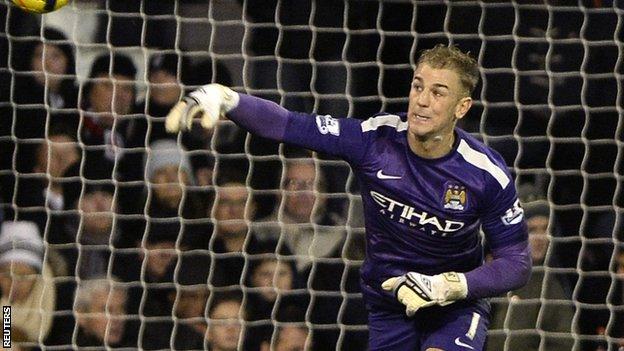 Goalkeeper Joe Hart will keep his place in Manchester City's side for their game against Liverpool on Boxing Day.

The England international, 26, made his first Premier League start since 27 October in City's 4-2 victory against Fulham at Craven Cottage on Saturday.

"He deserved to play and he also deserves to continue," said City manager Manuel Pellegrini.

"In every match, we could play with 11 different starters, but at the moment Joe will continue to play."

Pellegrini added: "Joe did well and it was not easy. The pitch was very quick and there was a lot of wind but he had a very good game."

Hart's last Premier League appearance had come in his side's 2-1 defeat against Chelsea where his last-minute mistake enabled Fernando Torres to score the winner at Stamford Bridge.

Romanian Costel Pantilimon played in City's next seven Premier League matches, with Hart only appearing in two Champions League games and a League Cup quarter-final against Championship side Leicester.

"When I put Pantilimon in the starting XI, I spoke with Joe and he understood he was not in a good moment," said Pellegrini, who said it was "a tough decision" to make the change.

"Pantilimon was also doing well but I thought this game would be better for Joe," added the Chilean.

"We have a squad and I have to make the decision every week who will play, not only Joe Hart."

City had gone 2-0 ahead against Fulham after Yaya Toure's free-kick and a close-range finish from Vincent Kompany.

A goal from Kieran Richardson and Kompany's mistake - when he sliced a clearance into his own net - made it 2-2, before late goals from substitutes Jesus Navas and James Milner gave City victory.

The three points took City up to second in the Premier League table, although they will drop back down to third after Arsenal play Chelsea on Monday.

"Fulham are a tough team at home and they defend very well," added Pellegrini. "We started well but, after slipping back, Navas and Milner made huge contributions.

"Their second goal was very bad luck and it would be impossible to repeat. But these things happen and the reaction of the team was very important."

City entertain Liverpool, who will lead the table at Christmas if Arsenal fail to beat Chelsea on 23 December, at Etihad Stadium on Thursday.