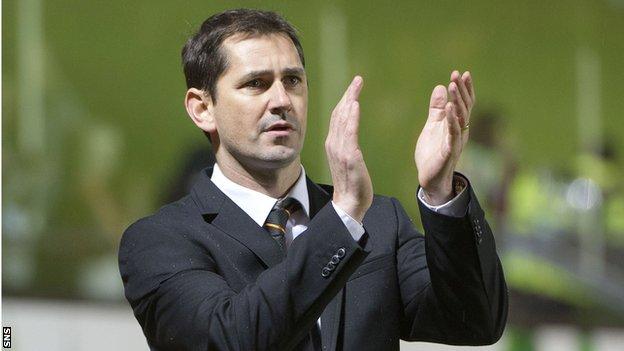 Dundee United boss Jackie McNamara said he was happier with three points in the 1-0 win against Ross County, rather than extending their four-goal winning streak.

United won their previous five games with four goals or more, but managed only one at home to County.

"The most important thing is the three points," said McNamara.

"I thought we kept plugging away at them, we were very patient, but we got our just rewards in the game."

Gary Mackay-Steven's second-half strike completed a well-worked move that involved David Goodwillie and Stuart Anderson, but was the only goal in a game that United dominated for the majority of the 90 minutes.

I thought we kept plugging away at them, we were very patient, but we got our just rewards in the game

The win pushes United up to second in the Premiership table, although McNamara insisted it was more important for his players to secure a victory against a resolute County side.

"It was a fantastic finish and a great pass from Stuart," said McNamara.

"I'm delighted for him and the lads, because they put so much effort into it.

"I emphasised it before the game, to be patient, that they would get their rewards - and they got it.

"I thought they tried to take the sting out of the game, time-wasting at times. But we kept going, especially in the second half and I thought we got what we deserved."

Brian Graham could have increased the tally for United with two headers that landed straight in the arms of County keeper Michael Fraser, and John Rankin's long-range effort edged wide, but the United manager remained content that his squad were creating goal-scoring opportunities in crucial matches.

"Their keeper had a good few saves from a couple of headers from Brian," said McNamara.

"We could have had a few more goals, but the good thing is we're creating chances, and from me as an ex-defender, it's good to get a clean sheet.

"It's important - there's a busy period coming up with the games we've got, so we need everybody in the squad and when they came on it put Ross county on the back foot.

"Given the start we had at the start of the season, the first few games there was a few question marks over the squad, but I'm delighted for the lads and the effort they've put in, their desire to keep going in games - they get the rewards for it."