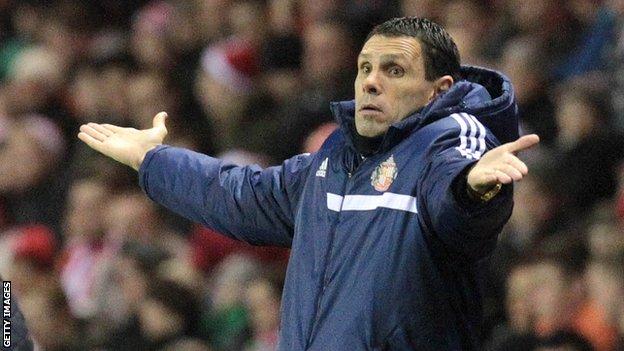 Sunderland are running out of time in their efforts to avoid relegation, says manager Gus Poyet.

The Black Cats will be bottom of the table on Christmas Day, and just one team - West Brom in 2004-05 - have avoided Premier League relegation in those circumstances.

Sunderland in the Capital One Cup quarter-finals on Tuesday, but could only draw on their return to Premier League action.

Just four of Poyet's team's 19 shots were on target and Wes Brown was sent off in injury time after a rash tackle on Ricky van Wolfswinkel.

Poyet said: "This is where we are. The quality is what you see, there is no more.

"I was not expecting this. I have always said I hate excuses. Until now for some reason, we have always had an excuse and people can use it.

"Today, we have not. Today was a day to win and we didn't, so we are responsible for where we are.

"It's getting more and more difficult, so who are you going to blame?

"This was a 0-0 draw that does Sunderland no good whatsoever. They didn't fashion enough clear-cut chances and the talking point was in injury time, when Wes Brown came clattering into Ricky van Wolfswinkel.

"It was a horrible challenge.

"Brown came closest to breaking the deadlock with a header that struck the post.

"Norwich soaked up the pressure and looked dangerous on the break but Sunderland are in deep, deep trouble."

"It would be very nice if somebody could tell me why we are at the bottom, and if you think it's because of me, I'll take it if it's not personal."

Brown had Sunderland's best chance, nodding the ball against the post after a goalmouth scramble. Phil Bardsley also had a good opportunity but headed straight at goalkeeper John Ruddy.

Poyet added: "I expect somebody to score. It doesn't have to be Ki [Sung-Yueng] all the time, but it has to be somebody.

"I have no explanation. There were things that happened on the pitch that are difficult to explain."

He said: "The challenge was certainly reckless."