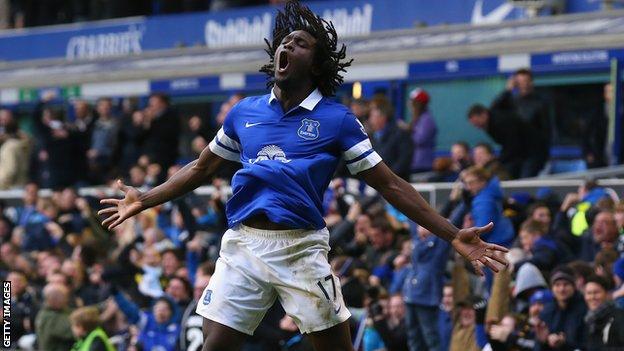 Swansea City manager Michael Laudrup has revealed he missed out on signing Everton's on-loan striker Romelu Lukaku in the summer.

Laudrup, whose side host the Toffees on Sunday, says he stopped pursuing the Belgium forward because his parent club Chelsea said they wanted to keep him.

Lukaku has scored eight goals for Everton, who will go fourth in the Premier League with a win in Wales.

"Maybe I should have called again," said Laudrup. "He is a real talent."

Former Swansea boss Roberto Martinez returns to the Liberty Stadium on Sunday for the first time since taking charge at Goodison Park in the summer.

His side have only lost once in the league this season but Martinez has failed to win his four previous games against Swansea as a manager.

However, the Swans have never beaten the Toffees in 17 previous attempts and have not scored against them in their four Premier League meetings.

Laudrup, who has been linked to the Tottenham job, believes stopping Lukaku is key to ending that dismal run.

"He is fast, can use both feet, he is strong, he is good in the air and is good on the counter-attack," said Laudrup. "He has been a huge signing for them."

Regarding his own squad, Laudrup says he is unlikely to sign a goalkeeper in January, despite the absence of current number one Michel Vorm.

The Dutchman had surgery on his knee on Thursday and Swansea only have teenagers Gregor Zabret and Oliver Davies as support to Gerhard Tremmel.

"Michel's operation went well and we are talking about three to four weeks out for him," said Laudrup.

"But I don't think we need to sign a goalkeeper for three weeks and we also have David Cornell out on loan."