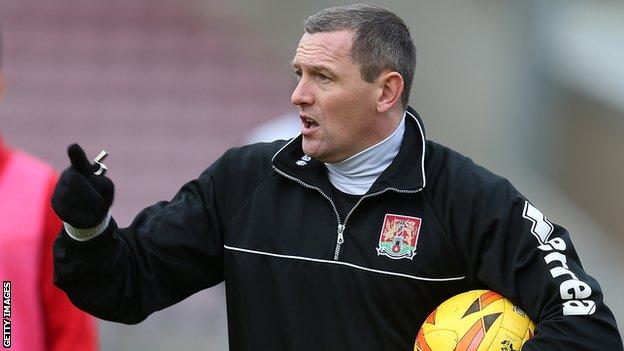 The result leaves the club bottom of League Two and the 42-year-old has been relieved of his duties by the side he took over in November 2011.

"A lot of players went in the summer and they were replaced with players who weren't as good.

"Andy King and Tim Flowers will probably step in now but unless they have a different motivational tool available to them, it's difficult to see how they'll get more out of them. The players gave Aidy quite a lot. I don't think there's anyone who wasn't playing for him.

"I wouldn't give a new manager a two or three year deal - it's got to be until the end of the season, to prove they can keep this team in the league."

The defeat at home against Wycombe was their 14th loss this season.

"The board of directors just felt the time was right for a change," Cobblers head of media Gareth Willsher told BBC Radio Northampton.

"It's a decision no one is happy with and is a disappointment."

In his first term in charge at Sixfields, the former Watford, Colchester and Coventry manager guided them to safety having taken over with the club just above the League Two relegation zone.

Last year the former Watford boss led the Cobblers to the play-off final having finished sixth, before being beaten by Bradford 3-0 at Wembley.

But this season's campaign has been a constant disappointment, with the club having only won four league games.

In a statement on their website, the club said: "Aidy Boothroyd has left Northampton Town football club.

"The decision was made by chairman David Cardoza after Saturday's loss to Wycombe Wanderers."

And Willsher added: "The board have been looking at things over a period of time and it has not just come down to today's game.

"We're at Christmas time, we're close to halfway through the season and we are bottom of the Football League.

"You look at the squad and the players, [they] are better than a 24th position. It's imperative this club moves out of the bottom two so we can kick start next season with the momentum of the redevelopment in the Football League.

"The chairman has backed and supported Aidy but we have not kicked on from last season. Everyone hoped he would turn it around."

No decision has been made on whether assistant manager Andy King or coach Tim Flowers will remain at the club.