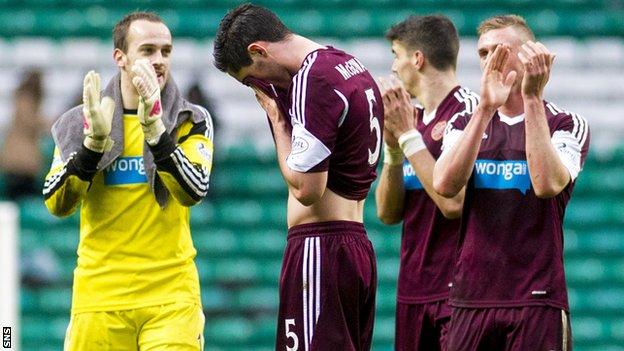 Having been beaten 7-0 in their recent Scottish Cup meeting, Locke was happy with how his players competed in the 2-0 loss in Glasgow.

"We're still a bit raw with the result a couple of weeks ago," said Locke.

"We were all hurting about that, myself, the backroom team, all the players; and it was important that we restored a bit of pride."

After Jamie MacDonald had made several fine saves to keep Celtic at bay, Kris Commons scored the opener.

Commons cleared off the line to deny Dylan McGowan as the match neared its end and James Forrest struck a second for the hosts in injury time.

"We had to sit back at times and give Celtic a lot of possession, explained Locke, whose side are bottom of the Scottish Premiership.

"After the last game it was important that we learned and I think you saw today that it was a far better performance.

"Sometimes you've got to come to places, especially like this, and try and contain teams and I thought we did that really well.

"We were a bit unlucky not to get an equaliser right at the end. We competed a lot better, we were well organised and on another day big Dylan's header goes in. It would've been great

"I felt every Hearts player gave it everything, battled really hard, competed well and I was pleased with every single person in a Hearts jersey.

"We're not going to stay in the league by beating Celtic, it's all the other teams round about us.

"We've got a run of games coming up now. Hopefully, we can get a few players back from injury and if we can do that, hopefully we can get the results that the supporters especially deserve."