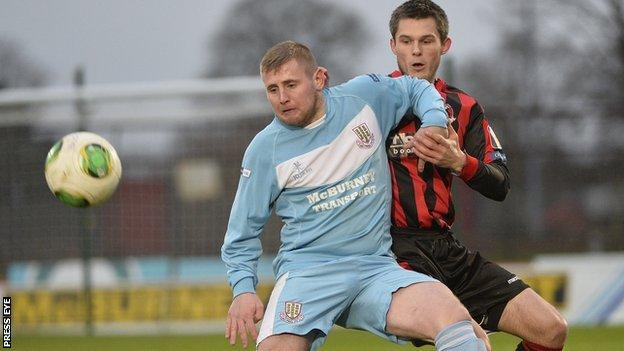 The result sees the Crues drop to third place in the Premiership table, while the Sky Blues move up to seventh.

Ballymena's victory completed a double, United having been the last team to beat the Crues back on 17 August.

The best early chances fell to the home side but Cushley fired over, Allan Jenkins lobbed over and Tony Kane was off-target with a free-kick.

Chris Morrow hit the side-netting with a free-kick for the Crues but then Jenkins fired wide and Sean O'Neill did well to gather Thompson's low shot, and also dealt with Davy Munster's volley.

After the break, Gary McCutcheon headed wide, then Cushley fired an effort across the face of goal and then over the bar when well placed.

The Crues pressed for an equaliser and David McAllister sent a curler just over the bar and Sean Cleary had the ball in the net, but the flag was up for offside.

The outcome gave Ballymena some measure of revenge for their League Cup and County Antrim Shield semi-final defeats at Seaview this season.

"We have been playing well and could have picked up more league points this season if luck had been on our side," said Ballymena manager Glenn Ferguson.

"I felt we deserved more from the League Cup semi-final on Tuesday, but we got what we deserved today. It was a great response from the boys after losing the way we did in midweek.

"David (Cushley) is maturing as a player and the goals he is adding to his game are outstanding. He showed great athleticism to score today."