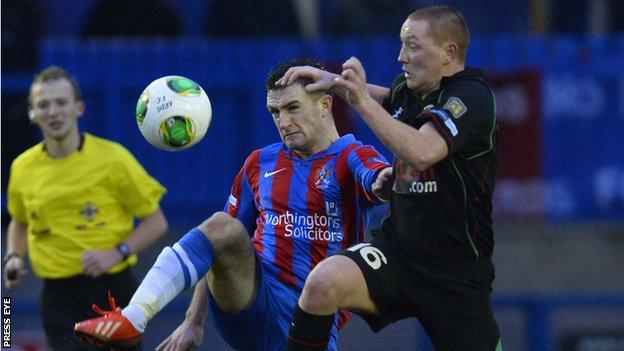 Ards's six-match losing run ended as they drew with Glentoran at Clandeboye Park and Niall Currie's players will probably feel they should have won.

The Glens did have the better of the first half with Jordan Stewart continuing his impressive recent form.

However, Ryan Moffett hit the Glens woodwork in the second half while Elliott Morris had to make a great late save to deny Willie Faulkner.

After a quiet opening, Stewart's pass set up a 20th-minute chance for Richard Clarke but Moffett did brilliantly to block the effort.

Stewart then produced a great cross into the Ards penalty area but Marcus Kane was unable to make a connection.

Within a minute of the restart, Craig McMillan had the ball in the Glentoran net but the effort was ruled out for offside and it appeared the correct direction.

Moffett hit the woodwork from a free-kick while McKibbin had to make a couple of smart saves at the other end to keep the game goalless.

Right at the death, Faulkner found himself with only Morris to beat but the Glens keeper spread himself to make the save.