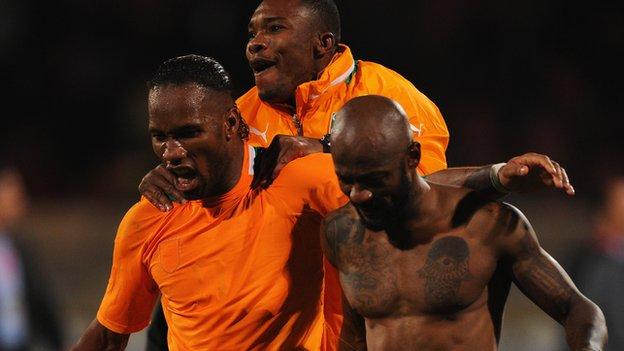 Former Ivory Coast manager Phillipe Troussier fears The Elephants will struggle to get past the group phase at the World Cup in Brazil next year.

"I am worried about Ivory Coast's participation next year, it will be difficult for them," Troussier told BBC Sport.

Ivory Coast are the top ranked side in Africa but the 58-year-old is unconvinced by their credentials.

Referencing the Ivorians' 4-2 aggregate win over Senegal in the play-offs to reach next year's finals, the Morocco-based coach said: "I watched the games and I felt they were fortunate to qualify.

Ivory Coast are not as hungry now, and physically the team is getting very old.

"If the second leg had been played in Senegal rather than on neutral territory in Morocco I don't think Ivory Coast would have made it."

Many of coach Samir Lamouchi's squad received their formative grounding in football from Troussier at the ASEC Academy in Abidjan.

He has enjoyed watching the likes of the Toure brothers, Kolo and Yaya, go on to forge successful careers, but Troussier feels the squad's appetite for success is waning.

"At the beginning, when they were young, the players were all hungry to prove themselves in Europe," he said.

"People can complain that they have not won a trophy but they are the first generation to make the whole world know about and respect Ivory Coast.

"However, they are not as hungry now, and physically the team is getting very old."

Troussier expects Japan and Colombia to progress from Group C at the expense of the West African giants and unfancied Greece.

"I used to manage Japan and I know how strong their teamwork is - I believe they will win the group," he said.

Troussier feels followers of Nigeria, another of his former teams, along with Algeria have more reason to approach the tournament with optimism.

"Stephen Keshi has crocodile thick skin and is doing a very good job as coach of Nigeria," he said of the Super Eagles, who are in Group F with Argentina, Bosnia and Herzegovina and Iran.

"Algeria can also imagine they will qualify, with the group they have been given [Belgium, Russia and South Korea]."

"Ghana [in Group G with Germany, Portugal and United States] and Cameroon [in Group A with Brazil, Croatia and Mexico] will find it difficult.

"But African football has no complexes any more and they can all find reasons to dream."