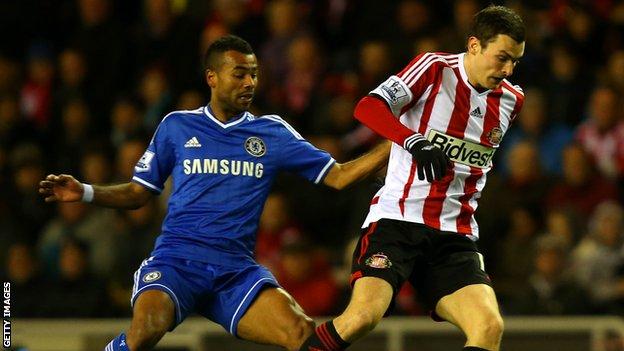 Chelsea manager Jose Mourinho has refused to criticise Ashley Cole for attending Arsenal's Christmas party, but has revealed he is not likely to start against his old club on Monday.

Cole, 33, was pictured at the party on Wednesday - 24 hours after Chelsea's Capital One Cup exit at Sunderland.

"I keep my opinion to myself - it was a free day for them," said Mourinho. "I'm not a father, I'm a manager.

"From the beginning Ashley's not playing."

He continued: "But today is Friday, the game is Monday. Something can happen in between.

"I play Branislav Ivanovic right-back, I play Cesar Azpilicueta left-back, I play John Terry and I have to choose between Gary Cahill and David Luiz."

England international Cole, who featured in Tuesday's extra-time 2-1 defeat by Sunderland, has lost his place in recent weeks to Azpilicueta and has not appeared in the league since losing 2-0 to Newcastle on 2 November.

Chelsea travel to Arsenal third in the Premier League knowing victory will take them above their London rivals.