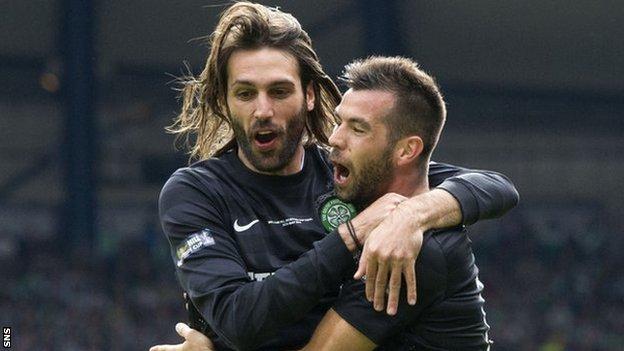 Celtic manager Neil Lennon has conceded that it is becoming more likely that Georgios Samaras and Joe Ledley will leave the Scottish champions.

The current deals with Wales midfielder Ledley and Greece striker Samaras end this summer and they are free to talk to other clubs in January.

"And obviously we would like some sort of indication as to what they're going to do."

It's a difficult situation for us and for them. We spoke to both of them personally a while back but had nothing back since

Asked if it was becoming more likely they would leave as time went by without an answer, Lennon replied: "The honest answer is, realistically, yes."

The 26-year-old Ledley joined Celtic from Cardiff in 2010 and has been linked with a return to the club who have since been promoted to England's top flight.

Samaras has been in Glasgow since originally moving on loan from Manchester City in 2008 and speculation has also linked the 28-year-old with clubs in Europe.

Lennon said the club were still waiting to hear back from the pair.

"The ball is all very much in their court," said the manager. "It's getting to the point where there will be a lot of speculation.

"We've made it clear that we are willing to speak them and we have spoken to Joe already on the situation, but we've heard nothing back.

"The contracts are up in the summer and they are two players we don't want to go, but we can't force them to stay.

"We are doing everything we can at the minute to do that.

"We have had no indication either way of what the players want to do.

"It's a difficult situation for us and for them. We spoke to both of them personally a while back but had nothing back since."

Lennon, who has been linked with AZ Alkmaar's Aron Johannsson and Heerenveen's Iceland striker, Alfred Finnbogason, was spotted in the Netherlands on Wednesday as the two sides met in the Dutch Cup, with the USA forward impressing with two goals.

"I feel the squad is a little bit thin and I am all out looking at players at the minute to see if we can find one that will suit us," said Lennon.

Japan midfielder Hiroki Yamada, who plays in the J-League with Jubilo Iwata,

"He's done OK," revealed Lennon. "He will be here for another day or two. So we will run rule over him.

"He seems to have adapted okay."