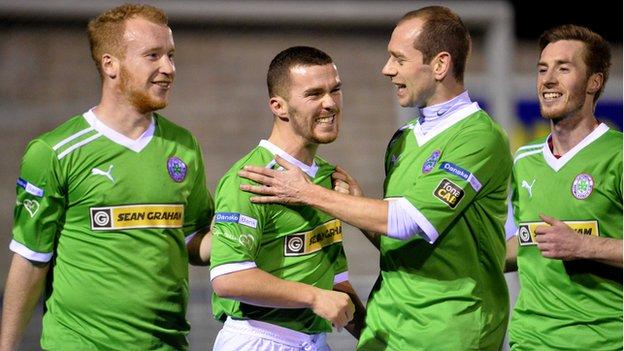 Cliftonville boss Tommy Breslin believes his side have rediscovered the form which could see them retain the Irish Premiership title.

The Reds, runaway winners last season, have recovered from a shaky start to the season and are aiming to stretch their unbeaten run in the league to 11.

Breslin's side take on Ballinamallard United at Solitude on Saturday.

"We have certainly got some momentum now, but we need to maintain that to the end of the season," said Breslin.

"We are starting to play and are scoring goals with Liam Boyce and Joe Gormley up front.

Join me on Sportsound to see how leaders Linfield fare against a rejuvinated Portadown. It's a clash between the Premiership's two longest-serving managers - so who will come out on top between David Jeffrey and Ronnie McFall?

"All the players are working hard and I can see the confidence growing. It has been good but there is a long way to go."

Linfield, aiming to regain the league title they have won for six of the last eight seasons, are two points clear at the top of the table following their 3-0 home win over Ballinamallard last weekend.

They take on Portadown at Windsor Park and Blues boss David Jeffrey is all to aware of the Ports' return to form.

Ronnie McFall's fourth-placed side have had four victories in a five-match unbeaten run and are seven points off the top.

Crusaders, deposed from top spot after a 0-0 draw with Glentoran, face Ballymena United for the second time in five days.

The Crues came from behind to claim a 4-3 extra-time win in Tuesday's League Cup semi-final at Seaview.

This time Ballymena are at home and Sky Blues boss Glenn Ferguson would love to turn the tables on the north Belfast title chasers.

"Our squad is not as big as that of Crusaders, but we have proved that we can compete with a big club," said Ferguson.

Crusaders have gone 24 matches unbeaten in all competitions, but the last team to beat them was Ballymena back on 17 August on the second weekend of the league.

Bottom club Ards take on fifth-placed Glentoran who have put together an 11-match Premiership run.

Meanwhile Coleraine, who have lost their last six in the league, are at home to Dungannon Swifts.