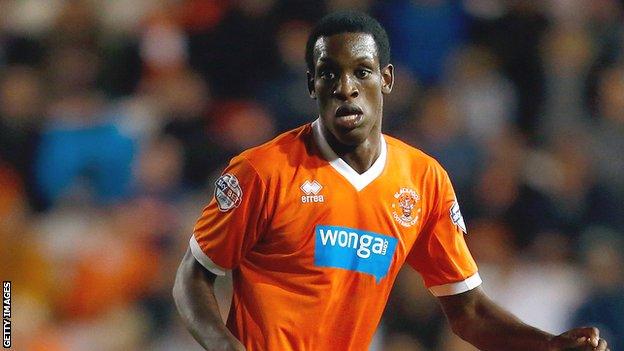 Blackpool's injury woes have continued with the news that midfielder Isaiah Osbourne will be out of action for five weeks with a hamstring problem.

Osbourne, 26, has made 14 Championship starts for the Seasiders this season.

Centre-back with a hip injury, while Craig Cathcart (back) is a doubt for Saturday's short trip to Burnley.

"We've got a few big-hitters out. The ones that come in have to do a job. I'm sure they will," said boss Paul Ince.

In addition, striker Ricardo Fuller serves the final game of a three-match suspension following his red card at Yeovil on 3 December.

Defender Cathcart and captain Barry Ferguson have only recently returned from long-term injuries.

Ince's side go into their Lancashire derby against the Championship leaders having lost their last three league games, while the Clarets are protecting an unbeaten league run at home that stretches back to March.

"Their home ground is a fortress and we're under no illusions how tough it's going to be," Ince told BBC Radio Lancashire. "Eventually they've got to lose one game, so why can't it be us on Saturday?"