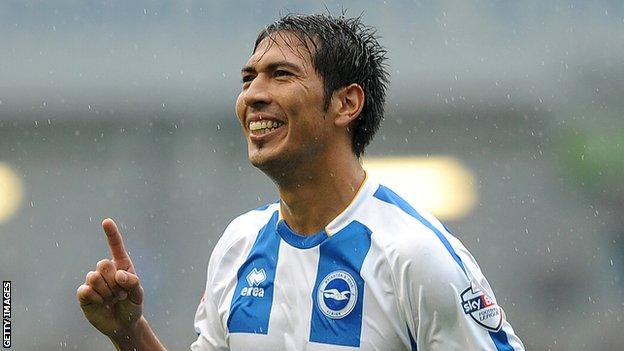 Brighton striker Leonardo Ulloa says he is building his way back to full fitness after more than two months out with a broken bone in his foot.

The 27-year-old, who scored four goals in seven league games before his injury, returned as a substitute in the 1-0 win at Middlesbrough last Saturday.

The Argentine told BBC Sussex: "My foot is 100% but my body needs more intensity with the games.

He added: "I am feeling really good. I played 10 minutes in the previous match and have been able to train for the past week.

"In the moments since the injury the people [Brighton supporters] have been spectacular with me. It's the same now with the recovery."

Barring injury and a three-match suspension earlier this season, Ulloa has been a near ever-present for the Seagulls since joining from Spanish side Almeria for a fee of £2m in January.

Despite having Ulloa sidelined, along with several other first-team players, Albion have lost just one of their last nine games to rise to eighth in the Championship table and the Sussex club currently lie two points off the play-off places.

"It's been extremely difficult watching everybody from the side and not always playing," he said.

"The team has been playing very well and working really hard and hopefully we can follow this line. Once everybody is back [from injury] it is a lot more competitive and the level of the team can rise."

Ashley Barnes has led the line in Ulloa's absence, scoring five times in their last six games, and Albion head coach Oscar Garcia says the two could be paired together.

"It's good to have Leo back because now we have got competition for places up front," Garcia told BBC Sussex.

"It is always good to have a player like him. He and Ashley are different players but can play together.

"They are different options. We played with some games with them both and it paid off."